Setting up using the optical plumb-bob

It is rare, if ever, that a theodolite is centred over the survey station using only a plumb-bob. All modern instruments have an optical plummet built into the alidade section of the instrument, or into the tribrach section . Proceed as follows:


(1) Establish the tripod roughly over the survey point using a plumb-bob.


(2) Depending on the situation of the optical plummet, attach the tribrach only, or the theodolite, to the tripod.


(3) Using the footscrews to incline the line of sight through the plummet, centre the plummet exactly on the survey point.


(4) Using the leg extension, slide the legs in or out until the circular bubble of the tribrach/theodolite is exactly centre. Even though the tripod movement may be excessive, the plummet will still be on the survey point. Thus the instrument is now approximately centred and levelled.


(6) Unclamp and move the whole instrument laterally over the tripod until the plummet cross-hair is exactly on the survey point.


(7) Repeat (5) and (6) until the instrument is exactly centred and levelled.


Provided there is no wind, centring with a plumb-bob is accurate to ±3−5 mm. In windy conditions it is impossible to use unless protected in some way.
The optical plummet is accurate to ±1−0.5 mm, provided the instrument axis is truly vertical and is not affected by adverse weather conditions. Forced centring or constrained centring systems are used to control the propagation of centring error in precise traversing. Such systems give accuracies in the region of ±0.1−0.3 mm.


The effect of centring errors on the measured horizontal angle (θ) : 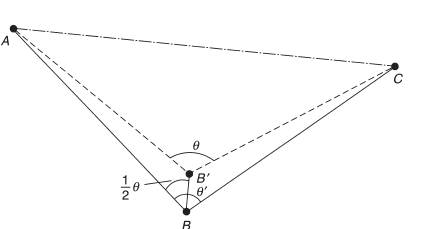 Due to a miscentring error, the theodolite is established at B, not the actual station B, and the angle θ is observed, not θ
The maximum angular error (eθ ) occurs when the centring error BB lies on the bisector of the measured angle and can be shown to be equal to:


The effect of target-centring errors on the horizontal angle at B can be obtained as follows. If the target errors are small then at A the target error is etA = eA/LAB and similarly the target error at C is etC = eC/LBC where eA and eC are the component parts of the error in target position at right angles to the lines BA and BC respectively to the right of their lines when viewed from B. The error in the angle would therefore be equal to the difference of these two errors:

It can be seen from equations  that as the lengths L decrease, the error in the measured angles will increase. Consider the following examples.