The sources of error in traversing are:

Linear and angular errors have been fully dealt with respectively.


The inclusion of short lines cannot be avoided in many engineering surveys, particularly in underground tunnelling work. In order, therefore, to minimize the propagation of centring error, a constrained centring system called the three-tripod system (TTS) is used.

Whilst the angle BCD is being measured, the tripod and tribrach are removed from A and set up at E in preparation for the next move forward. This technique not only produces maximum speed and efficiency, but also confines the centring error to the station at which it occurred. Indeed, the error in question here is not one of centring in the conventional sense, but one of knowing that the central axes of the targets and theodolite, when moved forward, occupy exactly the same positions as did their previous occupants. However, such a process does not guarantee that the tribrachs have been set up correctly over the survey station. The coordinates computed by this process will be those of the tribrach, not necessarily those of the survey station. Figure shows how centring errors may be propagated. Consider first the use of the TTS. The target erected at C, 100 m from B, is badly centred, resulting in a displacement of 50 mm to C. The angle. 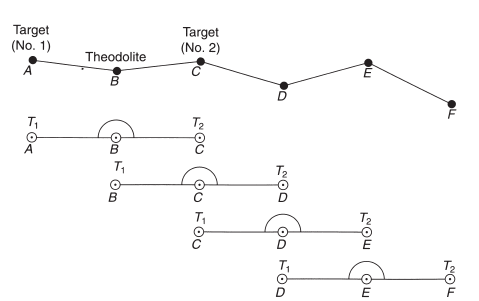 
The target is removed from C and replaced by the theodolite, which measures the angle BCD, thus bringing the survey back onto D. The only error would therefore be a coordinate error at C equal to the centring error and would obviously be much less than the exaggerated 50 mm used here. Consider now conventional equipment using one tripod and theodolite and sighting to ranging rods. Assume that the rod at C, due to bad centring or tilting, appears to be at C; the wrong angle, ABC, would be measured.

Now, when the theodolite is moved it would this time be correctly centred over the station at C and the correct angle BCD measured. However, this correct angle would be added to the previous computed bearing, which would be that of BC, giving the bearing CD. Thus the error e is propagated from the already incorrect position at C, producing a further error at D of the traverse. Centring of the instrument and targets precisely over the survey stations is thus of paramount importance; hence the need for constrained centring systems in precise traversing.