The various steps in traverse computation will now be carried out, with reference to the traverse shown in Figure . The observed horizontal angles and distances.


A common practice is to assume coordinate values for a point in the traverse, usually the first station, and allocate an arbitrary bearing for the first line from that point. For instance, in Figure 6.20, point A has been allocated coordinates of E 1000.00, N 2000.00, and line AB a bearing of 0◦ 00 00. If values of E 0.00, N 0.00 had been chosen there would have been negative values for the coordinates of some of the stations. Negative coordinates can be confusing. This has the effect of establishing a plane rectangular grid and orientating the traverse on it. As shown, AB becomes the direction of the N-axis, with the E-axis at 90◦ and passing through the grid origin at A.


The computational steps, in the order in which they are carried out, are:


(1) Obtain the angular misclosure W, by comparing the sum of the observed angles (α) with the sum of error-free angles in a geometrically correct figure.
(2) Assess the acceptability or otherwise of W.
(3) If W is acceptable, distribute it throughout the traverse in equal amounts to each angle.
(4) From the corrected angles compute the whole circle bearing of the traverse lines relative to AB.
(5) Compute the coordinates (E, N) of each traverse line.
(6) Assess the coordinate misclosure ( E,  N). 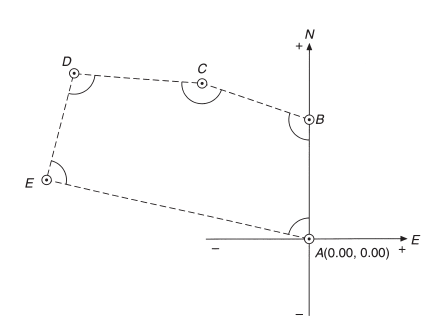 
(8) Compute the final coordinates (E, N) of each point in the traverse relative to A, using the balanced values of E, N per line.
The above steps will now be dealt with in detail.


(1) Distribution of angular error:
The majority of the systematic errors associated with horizontal angles in a traverse are eliminated by repeated double-face observation. The remaining random errors are distributed equally around the network as follows.

where α = observed angle
n = number of angles in the traverse
The angular misclosure W is now distributed by equal amounts on each angle, thus:

However, before the angles are corrected, the angular misclosureW must be considered to be acceptable. If W was too great, and therefore indicative of poor observations, the whole traverse may need to be re-measured. A method of assessing the acceptability or otherwise of W is given in the next section.

(2) Acceptable angular misclosure:
The following procedure may be adopted provided the variances of the observed angles can be assessed, i.e.