Traversing is one of the simplest and most popular methods of establishing control networks in engineering surveying. In underground mining it is the only method of control applicable whilst in civil engineering it lends itself ideally to control surveys where only a few intervisible points surrounding the site are required.


Traverse networks have the following advantages:


(1) Little reconnaissance is required compared with that needed for an interconnected network of points.
(2) Observations only involve three stations at a time so planning the task is simple.
(3) Traversing may permit the control to follow the route of a highway, pipeline or tunnel, etc., with the minimum number of stations.

Types of traverse:
Using the technique of traversing, the relative position of the control points is fixed by measuring the horizontal angle at each point, between the adjacent stations, and the horizontal distance between consecutive pairs of stations.


The procedures for measuring angles have been dealt with in Chapter 5 and for measuring distance  . For the majority of traverses carried out today the field data would most probably be captured with a total station. Occasionally, steel tapes may be used for distance. The susceptibility of a traverse to undetected error makes it essential that there should be some external check on its accuracy. To this end the traverse may commence from and connect into known points of greater accuracy than the traverse. In this way the error vector of misclosure can be quantified and distributed throughout the network, to minimize the errors. Such a traverse is called a ‘link’ traverse.


Alternatively, the error vector can be obtained by completing the traverse back to its starting point. Such a traverse is called a ‘polygonal’ or ‘loop’ traverse. Both the ‘link’ and ‘polygonal’ traverse are generally referred to as ‘closed’ traverses. The third type of traverse is the ‘free’ or ‘open’ traverse, which does not close back onto any known point and which therefore has no way of detecting or quantifying the errors.

Link traverse:
Figure 6.8 illustrates a typical link traverse commencing from the precisely coordinated point Y and closing onto pointW, with terminal orienting bearing to points X and Z. Generally, points X, Y, W and Z would be part of an existing precisely coordinated control network, although this may not always be the case. It may be that when tying surveys into the OS NG, due to the use of very precise EDM equipment the intervening traverse is more precise than the relative positions of the NG stations. This may be just a problem of scale arising from a lack of knowledge, on the behalf of the surveyor, of the positional accuracy of the grid points. In such a case, adjustment of the traverse to the NG could result in distortion of the intervening traverse.


The usual form of an adjustment generally adopted in the case of a link traverse is to hold points Y and W fixed whilst distributing the error throughout the intervening points. This implies that points Y and W are free from error and is tantamount to allocating a weight of infinity to the length and bearing of lineYW. It is thus both obvious and important that the control into which the traverse is linked should be of a higher order of precision than the connecting traverse.
The link traverse has certain advantages over the remaining types, in that systematic error in distance measurement and orientation are clearly revealed by the error vector.

(2) Polygonal traverse:
the concept of a polygonal traverse. This type of network is quite popular and is used extensively for peripheral control on all types of engineering sites. If no external orientation is available, the control can only be used for independent sites and plans and cannot be directly connected to other survey systems. In this type of traverse the systematic errors of distance measurement are not eliminated and enter into the result with their full weight. Similarly, orientation error would simply cause the whole network to swing through the amount of error involved and would not be revealed in the angular misclosure.


This is illustrated in Figures 6.11 and 6.12. In the first instance a scale error equal to X is introduced into each line of a rectangular-shaped traverse ABCD. Then, assuming the angles are error free, the traverse appears to close perfectly back to A, regardless of the totally incorrect coordinates which would give the
position of B,C and D as B, C and D. Figure  shows the displacement of B, C and D to B, C and D caused by an orientation error (θ) for AB. This can occur when AB may be part of another network and the incorrect value is taken for its bearing. The traverse will still appear to close correctly, however. Fortunately, in this particular case, the coordinates of B would be known and would obviously indicate some form of mistake when compared with B. 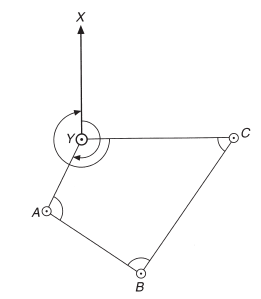