Because, at one time, it was easier to measure angles than it was distance, triangulation was the preferred method of establishing the position of control points. Many countries used triangulation as the basis of their national mapping system. The procedure was generally to establish primary triangulation networks, with triangles having sides ranging from 30 to 50 km in length. The primary trig points were fixed at the corners of these triangles and the sum of the measured angles was correct to ±3.

These points were usually established on the tops of mountains to afford long, uninterrupted sight lines. The primary network was then densified with points at closer intervals connected into the primary triangles. This secondary network had sides of 10–20 km with a reduction in observational accuracy. Finally, a third-order net, adjusted to the secondary control, was established at 3–5-km intervals and fourth-order points fixed by intersection. Figure 6.24 illustrates such a triangulation system established by the Ordnance Survey of Great Britain and used as control for the production of national maps. The base line and check base line were measured by invar tapes in catenary and connected into the triangulation by angular extension procedures. This approach is classical triangulation, which is 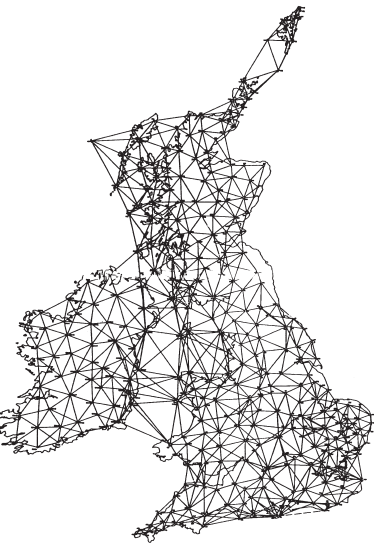 An example of a triangulation network

now obsolete. The more modern approach would be to use GPS which would be much easier and would afford greater control of scale error.


Although the areas involved in construction are relatively small compared with national surveys the accuracy required in establishing the control is frequently of a very high order, e.g. for long tunnels or for dam deformation measurements. There are two useful elements from triangulation that still remain applicable. If it is not possible to set a target over the point being observed then a distance cannot be measured. If the inaccessible point is to be coordinated from known points then the process is one of intersection. If the inaccessible point has known coordinates and the instrument station is to be coordinated then the process is one of resection.