Using a plumb-bob:
In low-rise construction a heavy plumb-bob (5 to 10 kg) may be used as shown in Figure . If the external wall were perfectly vertical then, when the plumb-bob coincides with the centre of the peg, distance d at the top level would equal the offset distance of the peg at the base. This concept can be used internally as well as externally, provided that holes and openings are available.

The plumb-bob should be large, say 5 kg, and both plumb-bob and wire need to be protected from wind. The motion of the plumb-bob may need to be damped by immersing the plumb-bob in a drum of water. The considerations are similar to those of determining verticality in a mine shaft but less critical. To ensure a direct transfer of position from the bottom to the top floor, holes of about 0.2 m diameter will need to be left in all intermediate floors. This may need the agreement of the building’s designer.


If two centre-lines at right angles to each other are carried vertically up a structure as it is being built, accurate measurement can be taken off these lines and the structure as a whole will remain vertical. Where site conditions permit, the stations defining the ‘base figure’ (four per line) are placed in concrete well clear of construction. Lines stretched between marks fixed from the pegs will allow offset measurements to locate the base of the structure. As the structure rises the marks can be transferred up onto the walls by theodolite, and lines stretched between them. It is important that the transfer is carried out on both faces of the instrument.

Where the structure is circular in plan the centre may be established as in Figure  and the radius swung out from a pipe fixed vertically at the centre. As the structure rises, the central pipe is extended by adding more lengths. Its verticality is checked by two theodolites and its rigidity ensured by supports fixed to scaffolding. 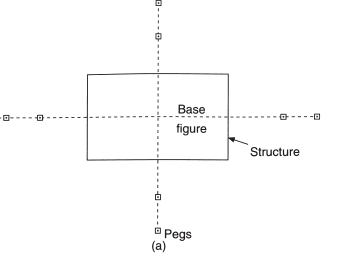