Coordinates on the transition spiral

The setting-out of curves by traditional methods of angles and chords has been dealt with. However, these methods are frequently superseded by the use of coordinates  of circular curves. The method of calculating coordinates along the centre-line of a transition curve is probably best illustrated with a worked example. Consider Worked example  dealing with the traditional computation of a clothoid spiral using Highway Transition Curve Tables. As with circular curves, it is necessary to calculate the traditional setting-out data first, as an aid to calculating coordinates. 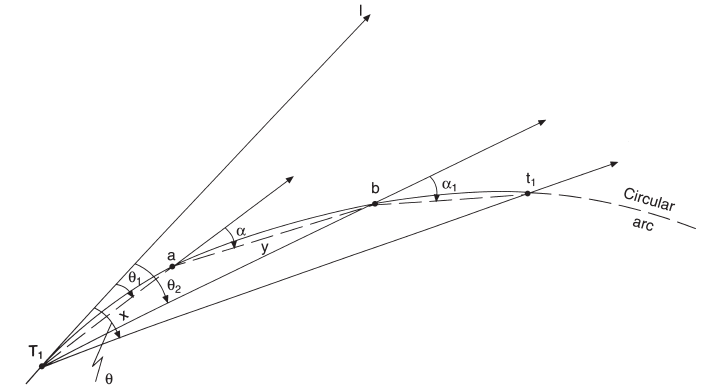 Coordinates along a transition curve

In Example  the first three setting-out angles are:

If working in coordinates, the coordinates of T1, the tangent point and I, the intersection point, would be known, say.


Using the P and R keys, or the traditional formula the coordinates of the line T1a are calculated, thus:

Using the sine rule, the angle at b can be calculated:

This procedure is now repeated to the end of the spiral, as follows:
In triangle T1bt1,


Using the ‘back angle to the origin’ ( − θ) at the end of the spiral (t1), the WCB of the tangent to the circular arc can be found and the coordinates along the centre-line calculated.