Effect of curvature on volumes

The application of the prismoidal and end-area formulae has assumed, up to this point, that the crosssections are parallel. When the excavation is curved , the sections are radial and a curvature correction must be applied to the formulae.


Pappus’s theorem states that the correct volume is where the distance between the cross-sections is taken along the path of the centre of mass. 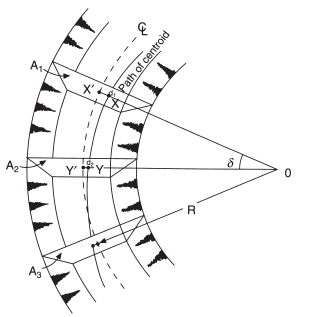 In other words, one corrects for curvature by multiplying the area A1 by (1−d1/R), and area A2 by (1−d2/R), the corrected areas then being used in either the end-area or prismoidal formulae, in the normal way, with D being the distance measured along the centre-line.

If the centre of mass lies beyond the centre-line, as in section A3, then the correction is (1 d3/R). This correction for curvature is, again, never applied to earthworks in practice. Indeed, it can be shown that the effect is very largely cancelled out on long earthwork projects. However, it may be significant on small projects or single curved excavations.