In the UK, civil engineering road design is carried out in a accordance with the Highways Agency’s Design Manual for Roads and Bridges.

In TD 9/93 the desirable maximum gradients for vertical curve design are:

Due to the shallowness of these gradients, the following VC approximations are permissible, thereby resulting in simplified computation .


(1) Distance T1D = T1BT2 = T1CT2 = (T1I IT2), without sensible error. This is very important and means that all distances may be regarded as horizontal in both the computation and setting out of vertical curves.


(5) The basic equation for a simple parabola is 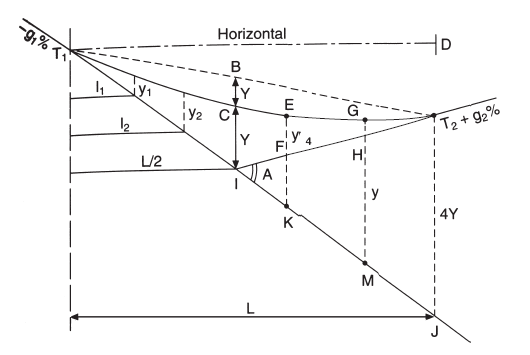 where y is the vertical offset from gradient to curve, distance l from the start of the curve, and C is a constant. Thus, as the offsets are proportional to distance squared, the following equation is used to compute them: