Sight distance is a safety design factor which is intrinsically linked to rate of change of grade, and hence to K-values. Consider once again the hump-backed bridge. Drivers approaching from each side of this particular vertical curve cannot see each other until they arrive, simultaneously, almost on the crest; by which time it may be too late to prevent an accident. Had the curve been longer and flatter, thus resulting in a low rate of change of grade, the drivers would have had a longer sight distance and consequently more time in which to take avoiding action.


Thus, sight distance, i.e. the length of road ahead that is visible to the driver, is a safety factor, and it is obvious that the sight distance must be greater than the stopping distance in which the vehicle can be brought to rest.


In order to cater for all the above variables, the height of the driver’s eye above the road surface i taken as being only 1.05 m; a height applicable to sports cars whose braking efficiency is usually very high. Thus, other vehicles, such as lorries, with a much greater eye height, would have a much longer sight distance in which to stop.

(1) Stopping sight distance (SSD):
The SSD is the sight distance required by a driver to stop a vehicle when faced with an unexpected obstruction on the carriageway. It comprises two elements:


(a) The perception-reaction distance, which is the distance travelled from the time the driver sees the obstruction to the time it is realized that the vehicle must stop; and


(b) The braking distance, which is the distance travelled before the vehicle halts short of the obstruction.


The above are a function of driver age and fatigue, road conditions, etc., and thus the design parameters are based on average driver behaviour in wet conditions.  provides values for desirable and absolute minimum SSD. 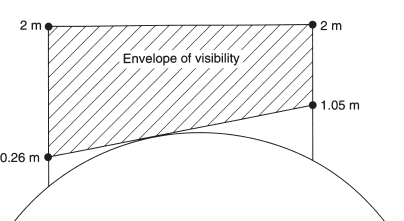 Visibility on a vertical curve

It has been shown that 95% of drivers’ eye height is 1.05 m or above; the upper limit of 2 m represents large vehicles.


The height of the obstruction is between 0.26 m and 2.0 m. Forward visibility should be provided in both horizontal and vertical planes between points in the centre of the lane nearest the inside of the curve.

On single carriageways, overtaking in the lane of the opposing traffic occurs. To do so in safety requires an adequate sight distance which will permit the driver to complete the normal overtaking procedure.


It has been shown that 85% of overtaking takes place in 10 seconds and Table 10.3 gives appropriate FOSD values relative to design speed.
It should be obvious from the concept of FOSD that it is used in the design of single carriageways only, where safety when overtaking is the prime consideration. For instance, consider the design of a crest curve on a dual carriageway with a design speed of 100 km/h.