The equation of motion

The equation of motion will first be established rigorously and in fairly advanced mathematical terms. The effect will then be described again but in a rather looser and more physical sense. Figure  shows the axis of the gyro spinner placed with respect to the surface of the Earth.Aset of orthogonal axes is established with the origin at O, the i direction in the direction of gravity, the j and k directions are in the local horizontal plane with the k direction making a small angle, α, with the local direction of north.

j is at right angles to i and k such that the axes form a right-handed orthogonal set. φ is the latitude of O. i, j and k are unit vectors in the directions i, j and k. Ω is the rotational velocity vector of the Earth.


The velocity vector of the earth may be broken into its component parts in the i, j and k directions so: 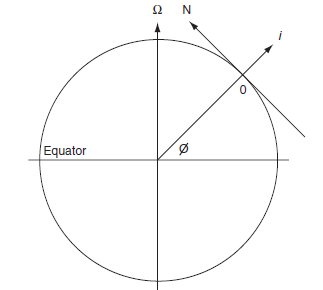 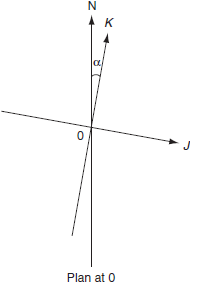 (a) Meridian section through the earth, (b) Plan view at 0