This is the theory of the osculating circle, and its application is described in the following sections.

Setting out with the theodolite at an intermediate point along the transition curve Figure 10.32 illustrates the situation where the transition has been set out from T1 to P3 in the normal way. The sight T1P4 is obstructed and the theodolite must be moved to P3 where the remainder of the transition will be set out. The direction of the tangent P3E is first required from the back-angle (φ3 − θ3). From the figure it can be seen that the angle from the tangent to the chord P3P 4 on the osculating circle is 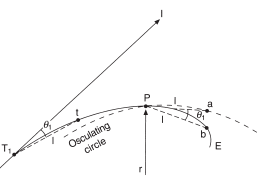 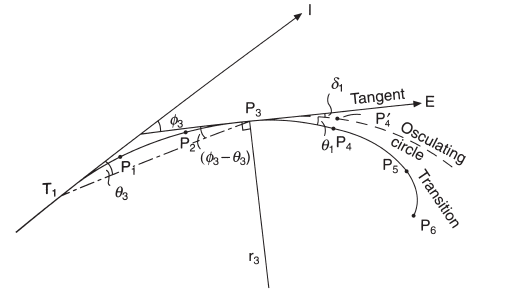 Setting out the transition from an intermediate point

or, if curve is defined by its ‘degree of curvature’ = D, then

Thus the back-angle to the origin is found 23


φ3, and the tangent established as already shown.
Now from  = L/2R, and θ = /3, the angles θ1, θ2, and θ3 are found as normal. In practice these angles would already be available, having been used to set out the first 30 m of the transition. Before the angles to the osculating circle can be found, the value of r3 must be known, thus, from rl = RL: