The transition curve is a curve of constantly changing radius. If used to connect a straight to a curve of radius R, then the commencing radius of the transition will be the same as the straight (∞), and the final radius will be that of the curve R (see Figure 10.28). Consider a vehicle travelling at speed (V) along a straight. The forces acting on the vehicle will be its weight W, acting vertically down, and an equal and opposite force acting vertically up through the wheels. When the vehicle enters the curve of radius R at tangent point T1, an additional centrifugal force (P) acts on the vehicle, as shown in Figures 10.24 and 10.25. If P is large the vehicle will be forced to the outside of the curve and may skid or overturn. In Figure  the resultant of the two forces is shown as N, and if the road is super-elevated normal to this force, there will be no tendency for the vehicle to skid. It should be noted that as

super-elevation will be maximum at minimum radius R.
It therefore requires a length of spiral curve to permit the gradual introduction of super-elevation, from zero at the start of the transition to maximum at the end, where the radius is the minimum safe radius R. 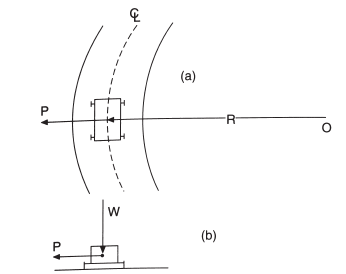 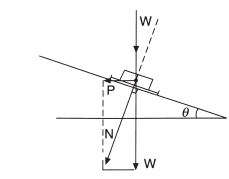 Principle of the transition:
The purpose then of a transition curve is to:


(1) Achieve a gradual change of direction from the straight (radius∞) to the curve (radius R).
(2) Permit the gradual application of super-elevation to counteract centrifugal force and minimize passenger discomfort.


Since P cannot be eliminated, it is allowed for by permitting it to increase uniformly along the curve. From equation , as P is inversely proportional to R, the basic requirement of the ideal transition curve is that its radius should decrease uniformly with distance along it. This requirement also permits the uniform application of super-elevation; thus at distance l along the transition the radius is r and rl = c (constant):

From Figure , tt1 is an infinitely small portion of a transition δl of radius r; thus: