Vertical curves (VC) are used to connect intersecting gradients in the vertical plane. Thus, in route design they are provided at all changes of gradient. They should be of sufficiently large curvature to provide comfort to the driver, that is, they should have a low ‘rate of change of grade’. In addition, they should afford adequate ‘sight distances’ for safe stopping at a given design speed. The type of curve generally used to connect the intersecting gradients g1 and g2 is the simple parabola. Its use as a sag or crest curve.

Gradients:
In vertical curve design the gradients are expressed as percentages, with a negative for a downgrade and a positive for an upgrade,

The angle of deflection of the two intersecting gradients is called the grade angle and equals A in Figure . The grade angle simply represents the change of grade through which the vertical curve deflects and is the algebraic difference of the two gradients: 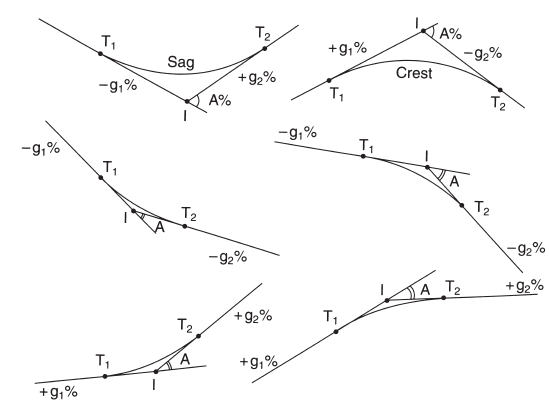