Introduction: In this section we’ll study how to take the patterns for all the needed tokens and build a piece of code that examines the input string and finds a prefix that is a lexeme matching one of the patterns. 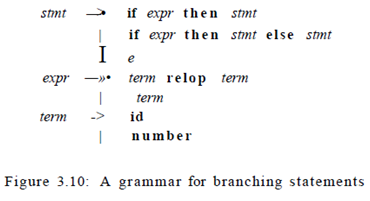 Transition Diagrams: Transition diagrams have a collection of nodes or circles, called states. Each state represents a condition that could occur during the process of scanning the input looking for a lexeme that matches one of several patterns. We may think of a state as summarizing all we need to know about what characters we have seen between the lexeme Begin pointer and the forward pointer (as in the situation of Fig. 3.3).

Edges are directed from one state of the transition diagram to another. Each edge is labeled by a symbol or set of symbols. If we are in some state 5, and the next input symbol is a, we look for an edge out of state s labeled by a (and perhaps by other symbols, as well). If we find such an edge, we advance the forward pointer arid enter the state of the transition diagram to which that edge leads. We shall assume that all our transition diagrams are deterministic, meaning that there is never more than one edge out of a given state with a given symbol among its labels. Starting in Section 3.5, we shall relax the condition of determinism, making life much easier for the designer of a lexical analyzer, although trickier for the implementer. Some important conventions about transition diagrams are:

1.       Certain states are said to be accepting, or final. These states indicate that a lexeme has been found, although the actual lexeme may not consist of all positions between the lexeme Begin and forward pointers. We always indicate an accepting state by a double circle, and if there is an action to be taken — typically returning a token and an attribute value to the parser — we shall attach that action to the accepting state.

3.        One state is designated the start state, or initial state; it is indicated by an edge, labeled "start," entering from nowhere. The transition diagram always begins in the start state before any input symbols have been read. 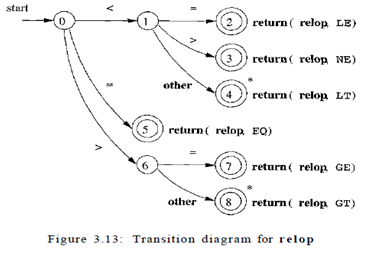 Example: Figure 3.13 is a transition diagram that recognizes the lexemes matching the token relop. We begin in state 0, the start state. If we see < as the first input symbol, then among the lexemes that match the pattern for relop we can only be looking at <, <>, or <=. We therefore go to state 1, and look at the next character. If it is =, then we recognize lexeme <=, enter state 2, and return the token relop with attribute LE, the symbolic constant representing this particular comparison operator. If in state 1 the next character is >, then instead we have lexeme <>, and enter state 3 to return an indication that the not-equals operator has been found. On any other character, the lexeme is <, and we enter state 4 to return that information. Note, however, that state 4 has a * to indicate that we must retract the input one position.

On the other hand, if in state 0 the first character we see is =, then this one character must be the lexeme. We immediately return that fact from state 5.

The remaining possibility is that the first character is >. Then, we must enter state 6 and decide, on the basis of the next character, whether the lexeme is >= (if we next see the = sign), or just > (on any other character). Note that if, in state 0, we see any character besides <, =, or >, we cannot possibly be seeing a r e l op lexeme, so this transition diagram will not be used.

Recognition of Reserved Words and Identifiers: Recognizing keywords and identifiers presents a problem. Usually, keywords like if or then are reserved (as they are in our running example), so they are not identifiers even though they look like identifiers. Thus, although we typically use a transition diagram like that of Fig. 3.14 to search for identifier lexemes, this diagram will also recognize the keywords if, then, and e l s e of our running example.