The Structure of the Generated Analyzer 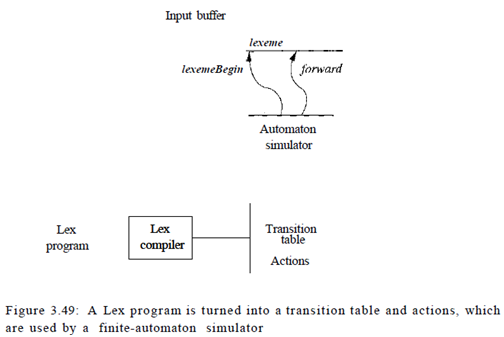 1.   A transition table for the automaton.

2.  Those functions that are passed directly through Lex to the output (see Section 3.5.2).

3. The actions from the input program, which appear as fragments of code to be invoked at the appropriate time by the automaton simulator.

To construct the automaton, we begin by taking each regular-expression pattern in the Lex program and converting it, using Algorithm 3.23, to an NFA. We need a single automaton that will recognize lexemes matching any of the patterns in the program, so we combine all the NFA's into one by introducing a new start state with e-transitions to each of the start states of the NFA's N{ for pattern pi. This construction is shown in Fig. 3.50. 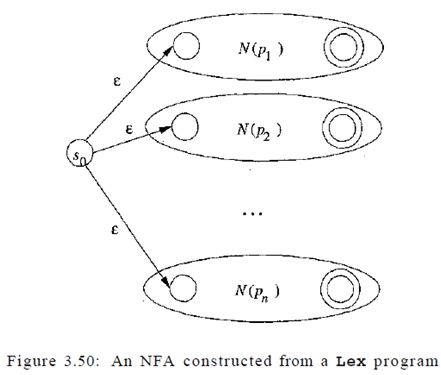 E x a m p l e: We shall illustrate the ideas of this section with the following simple, abstract example:

Note that these three patterns present some conflicts of the type discussed in Section 3.5.3. In particular, string abb matches both the second and third patterns, but we shall consider it a lexeme for pattern p2, since that pattern is listed first in the above Lex program. Then, input strings such as aabbb . . . . have many prefixes that match the third pattern. The Lex rule is to take the longest, so we continue reading 6's, until another a is met, whereupon we report the lexeme to be the initial a's followed by as many 6's as there are. Figure 3.51 shows three NFA's that recognize the three patterns. The third is a simplification of what would come out of Algorithm 3.23. Then, Fig. 3.52 shows these three NFA's combined into a single NFA by the addition of start state 0 and three e-transitions.