Introduction: A parser must be capable of constructing the tree in principle, or else the translation cannot be guaranteed correct. Parsing is the process of determining how a string of terminals can be generated by a grammar. In discussing this problem, it is helpful to think of a parse tree being constructed, even though a compiler may not construct one, in practice.

For any context-free grammar there is a parser that takes at most 0 (n 3) time to parse a string of n terminals. But cubic time is generally too expensive. Fortunately, for real programming languages, we can generally design a grammar that can be parsed quickly. Linear-time algorithms suffice to parse essentially all languages that arise in practice. Programming-language parsers almost always make a single left-to-right scan over the input, looking ahead one terminal at a time, and constructing pieces of the parse tree as they go.

Most parsing methods fall into one of two classes, called the top-down and bottom-up methods. These terms refer to the order in which nodes in the parse tree are constructed. In top-down parsers, construction starts at the root and proceeds towards the leaves, while in bottom-up parsers, construction starts at the leaves and proceeds towards the root. The popularity of top-down parsers is due to the fact that efficient parsers can be constructed more easily by hand using top-down methods. Bottom-up parsing, however, can handle a larger class of grammars and translation schemes, so software tools for generating parsers directly from grammars often use bottom-up methods. 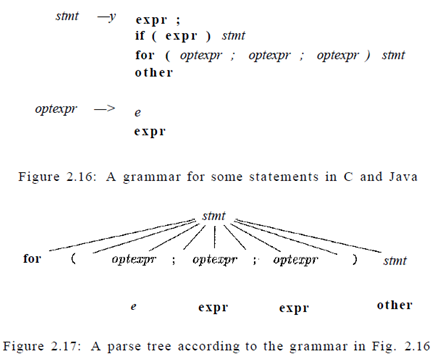 Top-Down Parsing : We introduce top-down parsing by considering a grammar that is well-suited for this class of methods. Later in this section, we consider the construction of top-down parsers in general. The grammar in Fig. 2.16 generates a subset of the statements of C or Java. We use the boldface terminals if and for for the keywords "if" and "for", respectively, to emphasize that these character sequences are treated as units, i.e., as single terminal symbols. Further, the terminal expr represents expressions; a more complete grammar would use a nonterminal expr and have productions for nonterminal expr. Similarly, other is a terminal representing other statement constructs.

The top-down construction of a parse tree like the one in Fig. 2.17, is done by starting with the root, labeled with the starting nonterminal stmt, and repeatedly performing the following two steps.

1.       At node JV, labeled with nonterminal A, select one of the productions for A and construct children at N for the symbols in the production body.

2.       Find the next node at which a subtree is to be constructed, typically the leftmost unexpanded nonterminal of the tree.