Introduction: This notation is called postfix because the rule is "operator after operand(s)". Parentheses are not needed. The notation we normally use is called infix. By far the simplest SDD implementation occurs when we can parse the grammar bottom-up and the SDD is S-attributed. In that case, we can construct an SDT in which each action is placed at the end of the production and is executed along with the reduction of the body to the head of that production. SDT's with all actions at the right ends of the production bodies are called postfix SDT's. 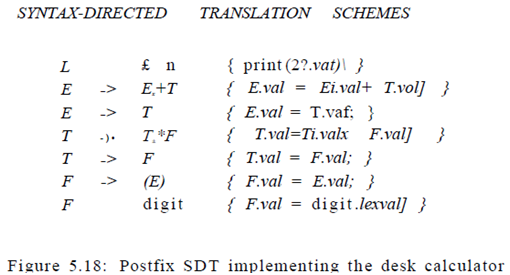 Example 1: The postfix SDT in Fig. 5.18 implements the desk calculator SDD of Fig. 5.1, with one change: the action for the first production prints a value. The remaining actions are exact counterparts of the semantic rules. Since the underlying grammar is LR, and the SDD is S-attributed, these actions can be correctly performed along with the reduction steps of the parser.

Parser-Stack Implementation of Postfix SDT's: Postfix SDT's can be implemented during LR parsing by executing the actions when reductions occur. The attribute(s) of each grammar symbol can be put on the stack in a place where they can be found during the reduction. The best plan is to place the attributes along with the grammar symbols (or the LR states that represent these symbols) in records on the stack itself. In Fig. 5.19, the parser stack contains records with a field for a grammar symbol (or parser state) and, below it, a field for an attribute. The three grammar symbols X YZ are on top of the stack; perhaps they are about to be reduced according to a production like A —> X YZ. Here, we show X.x as the one attribute of X, and so on. In general, we can allow for more attributes, either by making the records large enough or by putting pointers to records on the stack. With small attributes, it may be simpler to make the records large enough, even if some fields go unused some of the time. However, if one or more attributes are of unbounded size — say, they are character strings — then it would be better to put a pointer to the attribute's value in the stack record and store the actual value in some larger, shared storage area that is not part of the stack. 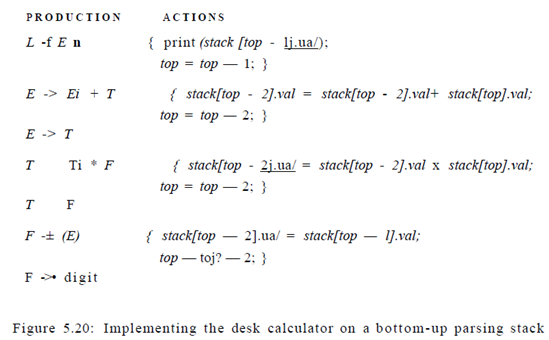 Example: Let us rewrite the actions of the desk-calculator SDT of Example 1 so that they manipulate the parser stack explicitly. Such stack manipulation is usually done automatically by the parser.

Suppose that the stack is kept in an array of records called stack, with top a cursor to the top of the stack. Thus, stack[top] refers to the top record on the stack, stack[top — 1] to the record below that, and so on. Also, we assume that each record has a field called val, which holds the attribute of whatever grammar symbol is represented in that record. Thus, we may refer to the attribute E.val that appears at the third position on the stack as stack[top — 2].val. The entire SDT is shown in Fig. 5.20.

For instance, in the second production, E -» E\ T, we go two positions below the top to get the value of E±, and we find the value of T at the top. The resulting sum is placed where the head E will appear after the reduction, that is, two positions below the current top. The reason is that after the reduction, the three topmost stack symbols are replaced by one. After computing E.val, we pop two symbols off the top of the stack, so the record where we placed E.val will now be at the top of the stack.

Note that we have omitted the steps that manipulate the first field of the stack records — the field that gives the LR state or otherwise represents the grammar symbol. If we are performing an LR parse, the parsing table tells us what the new state is every time we reduce; see Algorithm 4.44. Thus, we may simply place that state in the record for the new top of stack.