Recursive-descent parsing is a top-down method of syntax analysis in which a set of recursive procedures is used to process the input. One procedure is associated with each nonterminal of a grammar. Here, we consider a simple form of recursive-descent parsing, called predictive parsing, in which the lookahead symbol unambiguously determines the flow of control through the procedure body for each nonterminal. A predictive parsing is a special form of recursive-descent parsing, in which the current input token unambiguously determines the production to be applied at each step. The sequence of procedure calls during the analysis of an input string implicitly defines a parse tree for the input, and can be used to build an explicit parse tree, if desired.

The predictive parser in Fig. 2 . 1 9 consists of procedures for the non-terminals stmt and optexpr of the grammar in Fig. 2.16 and an additional procedure match, used to simplify the code for stmt and optexpr. Procedure match (t) compares its argument t with the lookahead symbol and advances to the next input terminal if they match. Thus match changes the value of variable lookahead, a global variable that holds the currently scanned input terminal.

Parsing begins with a call of the procedure for the starting nonterminal stmt. With the same input as in Fig. 2.1 8, lookahead is initially the first terminal for. Procedure stmt executes code corresponding to the production

In the code for the production body — that is, the for case of procedure stmt — each terminal is matched with the lookahead symbol, and each nonterminal leads to a call of its procedure, in the following sequence of calls:

Predictive parsing relies on information about the first symbols that can be generated by a production body. More precisely, let a be a string of grammar symbols (terminals and/or non-terminals). We define FIRST( a ) to be the set of terminals that appear as the first symbols of one or more strings of terminals generated from a. If a is e or can generate e, then e is also in F I R S T (a). 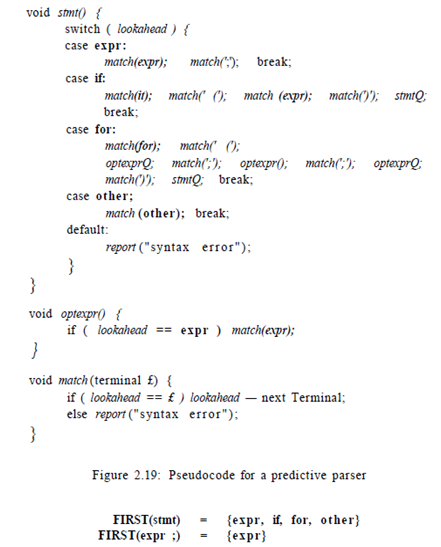 The details of how one computes FIRST(o;) are in Section 4 . 4 . 2 . Here, we shall just use ad hoc reasoning to deduce the symbols in F I R S T (a); typically, a will either begin with a terminal, which is therefore the only symbol in FIRST(Q;), or a will begin with a nonterminal whose production bodies begin with terminals, in which case these terminals are the only members of F I R S T ( a ) .

For example, with respect to the grammar of Fig. 2 . 1 6 , the following are correct calculations of F I R S T .