SDT\'s With Actions Inside Productions

Introduction: An action may be placed at any position within the body of a production. It is performed immediately after all symbols to its left are processed. Thus, if we have a production B -» X {a} Y, the action a is done after we have recognized X (if X is a terminal) or all the terminals derived from X (if X is a nonterminal). More precisely,

• If the parse is bottom-up, then we perform action a as soon as this occurrence of X appears on the top of the parsing stack.

• If the parse is top-down, we perform a just before we attempt to expand this occurrence of Y (if Y a nonterminal) or check for Y on the input (if Y is a terminal).

Example: As an extreme example of a problematic SDT, suppose that we turn our desk-calculator running example into an SDT that prints the prefix form of an expression, rather than evaluating the expression. The productions and actions are shown in Fig. 5.21.

Figure 5.21: Problematic SDT for infix-to-prefix translation during parsing Unfortunately, it is impossible to implement this SDT during either top down or bottom-up parsing, because the parser would have to perform critical actions, like printing instances of * or , long before it knows whether these symbols will appear in its input.

Using marker nonterminals M2 and M4 for the actions in productions 2 and 4, respectively, on input 3, a shift-reduce parser (see Section 4.5.3) has conflicts between reducing by M2 -> e, reducing by M4 —> e, and shifting the digit

Any SDT can be implemented as follows: 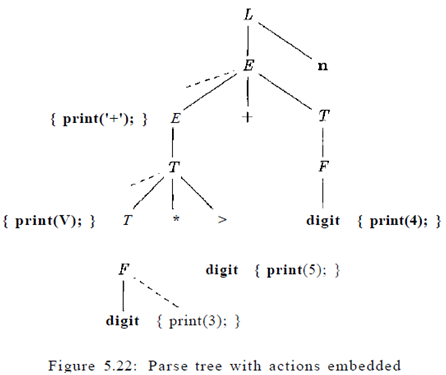 Ignoring the actions, parse the input and produce a parse tree as a result.

2. Then, examine each interior node N, say one for production A -± a. Add additional children to N for the actions in a, so the children of N from left to right have exactly the symbols and actions of a.

3. Perform a preorder traversal (see Section 2.3.4) of the tree, and as soon as a node labeled by an action is visited, perform that action.