Introduction: Using the techniques of the last three sections, we now construct a syntax directed translator, in the form of a working Java program that translates arithmetic expressions into postfix form. To keep the initial program manageably small, we start with expressions consisting of digits separated by binary plus and minus signs. We extend the program in Section 2.6 to translate expressions that include numbers and other operators. It is worth studying the translation of expressions in detail, since they appear as a construct in so many languages. 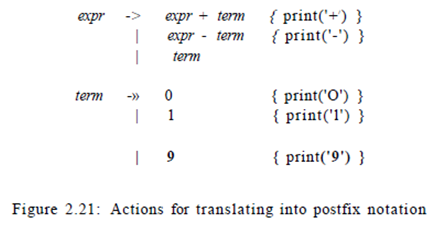 A syntax-directed translation scheme often serves as the specification for a translator. The scheme in Fig. 2.21 (repeated from Fig. 2.15) defines the translation to be performed here.

Often, the underlying grammar of a given scheme has to be modified before it can be parsed with a predictive parser. In particular, the grammar underlying the scheme in Fig. 2.21 is left recursive, and as we saw in the last section, a predictive parser cannot handle a left-recursive grammar.

We appear to have a conflict: on the one hand we need a grammar that facilitates translation; on the other hand we need a significantly different grammar that facilitates parsing. The solution is to begin with the grammar for easy translation and carefully transform it to facilitate parsing. By eliminating the left recursion in Fig. 2.21, we can obtain a grammar suitable for use in a predictive recursive-descent translator.

Abstract and Concrete Syntax: A useful starting point for designing a translator is a data structure calledan abstract syntax tree. In an abstract syntax tree for an expression, eachinterior node represents an operator; the children of the node represent theoperands of the operator. More generally, any programming construct can behandled by making up an operator for the construct and treating as operandsthe semantically meaningful components of that construct. 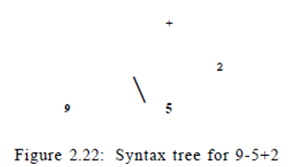 Abstract syntax trees, or simply syntax trees, resemble parse trees to an extent. However, in the syntax tree, interior nodes represent programming constructs while in the parse tree, the interior nodes represent non-terminals. Many non-terminals of a grammar represent programming constructs, but others are "helpers" of one sort of another, such as those representing terms, factors, or other variations of expressions. In the syntax tree, these helpers typically are not needed and are hence dropped. To emphasize the contrast, a parse tree is sometimes called a concrete syntax tree, and the underlying grammar is called a concrete syntax for the language.

In the syntax tree in Fig. 2.22, each interior node is associated with an operator, with no "helper" nodes for single productions (a production whose body consists of a single nonterminal, and nothing else) like expr —»• term or for e-productions like rest -> e.

It is desirable for a translation scheme to be based on a grammar whose parse trees are as close to syntax trees as possible. The grouping of sub expressions by the grammar in Fig. 2.21 is similar to their grouping in syntax trees. For example, sub expressions of the addition operator are given by expr and term in the production body expr term.