We shall conventionally draw control stacks with the bottom of the stack higher than the top, so the elements in an activation record that appear lowest on the page are actually closest to the top of the stack. 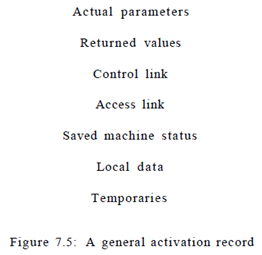 The contents of activation records vary with the language being implemented. Here is a list of the kinds of data that might appear in an activation record (see Fig. 7.5 for a summary and possible order for these elements):

1. Temporary values, such as those arising from the evaluation of expressions, in cases where those temporaries cannot be held in registers.

2.  Local data belonging to the procedure whose activation record this is.

3. A saved machine status, with information about the state of the machine just before the call to the procedure. This information typically includes the return address (value of the program counter, to which the called procedure must return) and the contents of registers that were used by the calling procedure and that must be restored when the return occurs.

4. An "access link" may be needed to locate data needed by the called procedure but found elsewhere, e.g., in another activation record.

5.  A control link, pointing to the activation record of the caller.

6.  Space for the return value of the called function, if any. Again, not all called procedures return a value, and if one does, we may prefer to place that value in a register for efficiency.

7.  The actual parameters used by the calling procedure. Commonly, these values are not placed in the activation record but rather in registers, when possible, for greater efficiency. However, we show a space for them to be completely general. 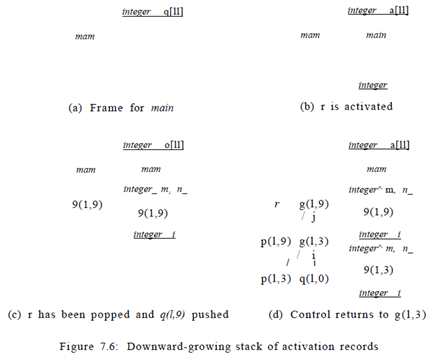 Example:Figure 7.6 shows snapshots of the run-time stack as control flows through the activation tree of Fig. 7.4. Dashed lines in the partial trees go to activations that have ended. Since array a is global, space is allocated for it before execution begins with an activation of procedure main, as shown in Fig. 7.6(a).