Introduction: Procedure calls are implemented by what are known as calling sequences, which consists of code that allocates an activation record on the stack and enters information into its fields. A return sequence is similar code to restore the state of the machine so the calling procedure can continue its execution after the call.

Calling sequences and the layout of activation records may differ greatly, even among implementations of the same language. The code in a calling sequence is often divided between the calling procedure (the "caller") and the procedure it calls (the "callee"). There is no exact division of run-time tasks between caller and callee; the source language, the target machine, and the operating system impose requirements that may favor one solution over another.

When designing calling sequences and the layout of activation records, the following principles are helpful:

2.  Fixed-length items are generally placed in the middle. If exactly the same components of the machine status are saved for each call, then the same code can do the saving and restoring for each. Moreover, if we standardize the machine's status information, then programs such as debuggers will have an easier time deciphering the stack contents if an error occurs.

3.  Items whose size may not be known early enough are placed at the end of the activation record. Most local variables have a fixed length, which can be determined by the compiler by examining the type of the variable. However, some local variables have a size that cannot be determined until the program executes; the most common example is a dynamically sized array, where the value of one of the callee's parameters determines the length of the array. Moreover, the amount of space needed for temporaries usually depends on how successful the code-generation phase is in keeping temporaries in registers. Thus, while the space needed for temporaries is eventually known to the compiler, it may not be known when the intermediate code is first generated. 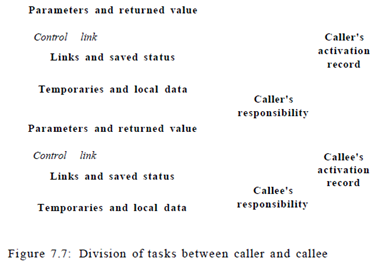 An example of how caller and callee might cooperate in managing the stack is suggested by Fig. 7.7. A register topsp points to the end of the machine status field in the current top activation record. This position within the callee's activation record is known to the caller, so the caller can be made responsible for setting topsp before control is passed to the callee. The calling sequence and its division between caller and callee are as follows:

1.  The caller evaluates the actual parameters.

2.  The caller stores a return address and the old value of topsp into the callee's activation record. The caller then increments topsp to the position shown in Fig. 7.7. That is, topsp is moved past the caller's local data and temporaries and the callee's parameters and status fields.

3.  The callee saves the register values and other status information.

4.  The callee initializes its local data and begins execution.

A suitable, corresponding return sequence is:

1.  The callee places the return value next to the parameters.

2.  Using information in the machine-status field, the callee restores topsp and other registers, and then branches to the return address that the caller placed in the status field.

3.  Although topsp has been decremented, the caller knows where the return value is, relative to the current value of topsp; the caller therefore may use that value.