Our algorithm to determine liveness and next-use information makes a backward pass over each basic block. We store the information in the symbol table.

We can easily scan a stream of three-address statements to find the ends of basic blocks as in Algorithm 8.5. Since procedures can have arbitrary side effects, we assume for convenience that each procedure call starts a new basic block.

Algorithm: Determining the liveness and next-use information for each statement in a basic block.

INPUT: A basic block B of three-address statements. We assume that the symbol table initially shows all non-temporary variables in B as being live on exit.

OUTPUT: At each statement i: x = y z in B, we attach to i the liveness and next-use information of x, y, and z.

METHOD: We start at the last statement in B and scan backwards to the beginning of B. At each statement i: x = y z in B, we do the following:

1.       Attach to statement i the information currently found in the symbol table regarding the next use and liveness of x, y, and y.

Here we have used as a symbol representing any operator. If the three-address statement i is of the form x = y or x = y, the steps are the same as above, ignoring z. Note that the order of steps (2) and (3) may not be interchanged because x may be y or z. 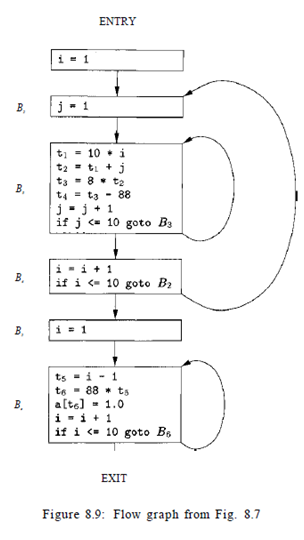 Once an intermediate-code program is partitioned into basic blocks, we represent the flow of control between them by a flow graph. The nodes of the flow graph are the basic blocks. There is an edge from block B to block C if and only if it is possible for the first instruction in block C to immediately follow the last instruction in block B. There are two ways that such an edge could be justified:

• There is a conditional or unconditional jump from the end of B to the beginning of C.

• C immediately follows B in the original order of the three-address instructions, and B does not end in an unconditional jump.

Example: The set of basic blocks constructed in Example 8.6 yields the flow graph of Fig. 8.9. The entry points to basic block B\, since B\ contains the first instruction of the program. The only successor of B\ is B2, because B\ does not end in an unconditional jump, and the leader of B2 immediately follows the end of B\.

Only BQ points to the exit of the flow graph, since the only way to get to code that follows the program from which we constructed the flow graph is to fall through the conditional jump that ends BG.