We begin by assigning to the nodes of an expression tree a number that tells how many registers are needed to evaluate that node without storing any temporaries. These numbers are sometimes called Ershov numbers, after A. Ershov, who used a similar scheme for machines with a single arithmetic register. For our machine model, the rules are:

2.       The label of an interior node with one child is the label of its child.

a)      The larger of the labels of its children, if those labels are different.

b)      One plus the label of its children if the labels are the same. 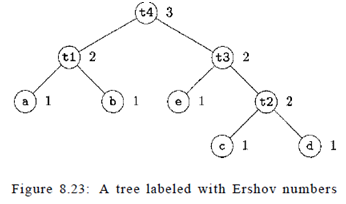 Example: In Fig. 8.23 we see an expression tree (with operators omitted) that might be the tree for expression (a — b) e x (c d) or the three-address code:

Generating Code from Labeled Expression Trees : It can be proved that, in our machine model, where all operands must be in registers, and registers can be used by both an operand and the result of anoperation, the label of a node is the fewest registers with which the expressioncan be evaluated using no stores of temporary results. Since in this model, weare forced to load each operand, and we are forced to compute the result correspondingto each interior node, the only thing that can make the generatedcode inferior to the optimal code is if there are unnecessary stores of temporaries.

The argument for this claim is embedded in the following algorithm for generating code with no stores of temporaries, using a number of registers equal to the label of the root.

INPUT: A labeled tree with each operand appearing once (that is, no common subexpressions).

OUTPUT: An optimal sequence of machine instructions to evaluate the root into a register.

METHOD: The following is a recursive algorithm to generate the machine code. The steps below are applied, starting at the root of the tree. If the algorithm is applied to a node with label k, then only k registers will be used. However, there is a "base" 6 > 1 for the registers used so that the actual registers used are Rb,Rb i,- --Rb k-i- The result always appears in Rb k-i-

1.       To generate machine code for an interior node with label k and two children with equal labels (which must be k — 1) do the following:

b.      Recursively generate code for the left child, using base 6; the result appears in Rb k-i-

c.       Generate the instruction OP Rb k,Rb k-i,Rb k, where OP is the appropriate operation for the interior node in question.

2.       Suppose we have an interior node with label k and children with unequal labels. Then one of the children, which we'll call the "big" child, has label k, and the other child, the "little" child, has some label m < k. Do the

a.       Recursively generate code for the big child, using base b; the result appears in register Rb k-i-

b.      Recursively generate code for the small child, using base 6; the result appears in register Rb m-\. Note that since m < k, neither Rb k-I nor any higher-numbered register is used.