1.  Object Allocation. The reference count of the new object is set to 1.

2.  Parameter Passing. The reference count of each object passed into a procedure is incremented.

5.  Transitive Loss of Reachability. Whenever the reference count of an object becomes zero, we must also decrement the count of each object pointed to by a reference within the object.

Example:Figure 7.18 shows three objects with references among them, but no references from anywhere else. If none of these objects is part of the root set, then they are all garbage, but their reference counts are each greater than 0. Such a situation is tantamount to a memory leak if we use reference counting for garbage collection, since then this garbage and any structures like it are never deallocated. 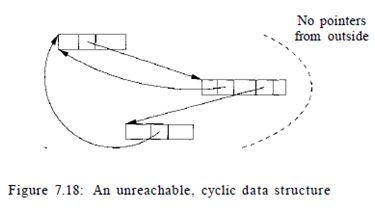 The advantage of reference counting, on the other hand, is that garbage collection is performed in an incremental fashion. Even though the total overhead can be large, the operations are spread throughout the mutator's computation. 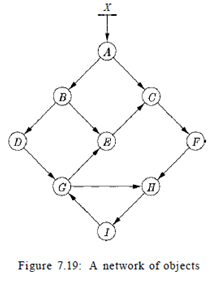 Although removing one reference may render a large number of objects unreachable, the operation of recursively modifying reference counts can easily be deferred and performed piecemeal across time. Thus, reference counting is particularly attractive algorithm when timing deadlines must be met, as well as for interactive applications where long, sudden pauses are unacceptable. Another advantage is that garbage is collected immediately, keeping space usage low.