Introduction: At first glance, it might appear that the array-indexing instructions can be treated like any other operator. Consider for instance the sequence of three address statements:

If we think of a [ i ] as an operation involving a and i, similar to a i, then it might appear as if the two uses of a [ i ] were a common subexpression. In that case, we might be tempted to "optimize" by replacing the third instruction z = a[ i ] by the simpler z = x. However, since j could equal i, the middle statement may in fact change the value of a [ i ] ; thus, it is not legal to make this change.

The proper way to represent array accesses in a DAG is as follows.

1.  An assignment from an array, like x = a [ i ] , is represented by creating a node with operator =[] and two children representing the initial value of the array, a0 in this case, and the index i. Variable x becomes a label of this new node.

2.  An assignment to an array, like a [ j ] = y, is represented by a new node with operator []= and three children representing a0 , j and y. There is no variable labeling this node. What is different is that the creation of this node kills all currently constructed nodes whose value depends on a0. A node that has been killed cannot receive any more labels; that is, it cannot become a common subexpression. 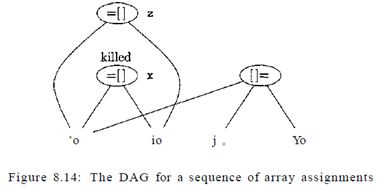 Example 8.13: The DAG for the basic block

is shown in Fig- 8.14. The node N for x is created first, but when the node labeled [ ] = is created, N is killed. Thus, when the node for z is created, it cannot be identified with N, and a new node with the same operands a0 and i0 must be created instead.

What is happening here is that, for efficiency reasons, b has been defined to be a position in an array a. For example, if the elements of a are four bytes long, then b represents the fourth element of a. If j and i represent the same value, then b [ i ] and b [ j ] represent the same location. Therefore it is important to have the third instruction, b [ j ] = y, kill the node with x as its attached variable. However, as we see in Fig. 8.15, both the killed node and the node that does the killing have cio as a grandchild, not as a child.