The code for the first procedure initializes the stack by setting SP to the start of the stack area in memory:

The reason for using *0(SP) in the BR instruction is that we need two levels of indirection: 0(SP) is the address of the first word in the activation record and *0(SP) is t h e return address saved there. The second part of the return sequence is in the caller, which decrements SP, thereby restoring SP to its previous value. That is, after the subtraction SP points to the beginning of the activation record of the caller: 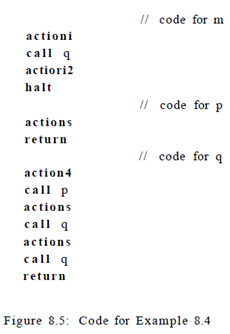 Example: The program in Fig. 8.5 is an abstraction of the quicksort program in the previous chapter. Procedure q is recursive, so more than one activation of q can be alive at the same time. Suppose that the sizes of the activation records for procedures m, p, and q have been determined to be msize, psize, and qsize, respectively. The first word in each activation record will hold a return address. We arbitrarily assume that the code for these procedures starts at addresses 100, 200, and 300, respectively, and that the stack starts at address 600.

We assume that ACTION4 contains a conditional jump to the address 456 of the return sequence from q; otherwise, the recursive procedure q is condemned to call itself forever. If msize, psize, and qsize are 20, 40, and 60, respectively, the first instruction at address 100 initializes the SP to 600, the starting address of the stack. SP holds 620 just before control transfers from m to q, because msize is 20. Subsequently, when q calls p, the instruction at address 320 increments SP to 680, where the activation record for p begins; SP reverts to 620 after control returns to q. If the next two recursive calls of q return immediately, the maximum value of SP during this execution 680. Note, however, that the last stack location used is 739, since the activation record of q starting at location 680 extends for 60 bytes.