Introduction: A function's prolog is responsible for allocating stack space for local variables, saved registers, stack parameters, and register parameters. All compilers for languages that use procedures, functions, or methods as units of user-defined actions manage at least part of their run-time memory as a stack. Each time a procedure1 is called, space for its local variables is pushed onto a stack, and when the procedure terminates, that space is popped off the stack. As we shall see, this arrangement not only allows space to be shared by procedure calls whose durations do not overlap in time, but it allows us to compile code for a procedure in such a way that the relative addresses of its nonlocal variables are always the same, regardless of the sequence of procedure calls.

Example: Figure 7.2 contains a sketch of a program that reads nine integers into an array a and sorts them using the recursive quick sort algorithm. The main function has three tasks. It calls read Array, sets the sentinels, and then calls quicksort on the entire data array. Figure 7.3 suggests a sequence of calls that might result from an execution of the program. In this execution, the call to partition (l,9) returns 4, so a[l] through a[3] hold elements less than its chosen separator value v, while the larger elements are in a [5] through a [9]. 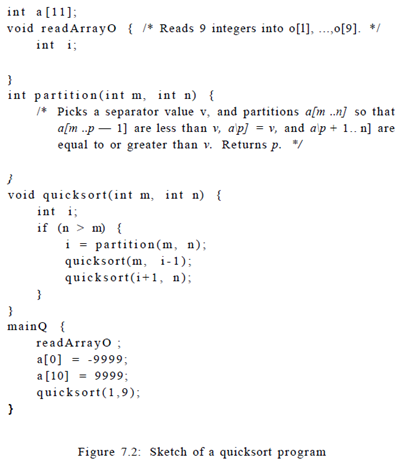 Example: One possible activation tree that completes the sequence of calls and returns suggested in Fig. 7.3 is shown in Fig. 7.4. Functions are represented by the first letters of their names. Remember that this tree is only

one possibility, since the arguments of subsequent calls, and also the number of calls along any branch is influenced by the values returned by partition.

The use of a run-time stack is enabled by several useful relationships between the activation tree and the behavior of the program: 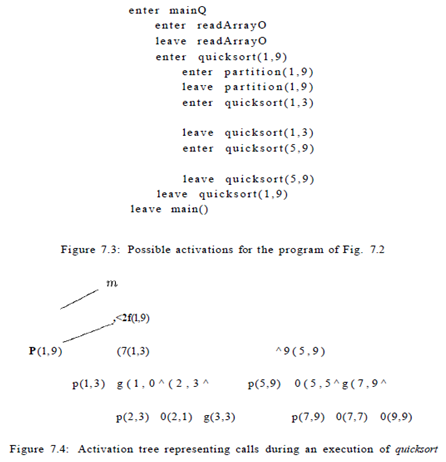 The sequence of procedure calls corresponds to a preorder traversal of the activation tree.