Introduction: A triple has only three fields, which we call op, argx, and arg2. Using triples, we refer to the result of an operation x op y by its position, rather than by an explicit temporary name. Thus, instead of the temporary ti in Quadruples a triple representation would refer to position (0). Parenthesized numbers represent pointers into the triple structure itself. 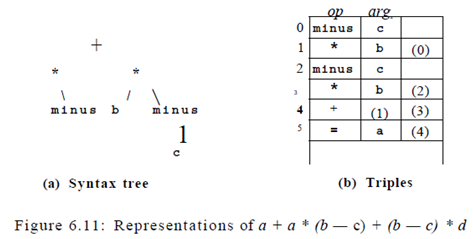 A ternary operation like x[i] = y requires two entries in the triple structure; for example, we can put x and i in one triple and y in the next. Similarly, x = y{.%] can implemented by treating it as if it were the two instructions t = y[i] and x = t, where i i s a compiler-generated temporary. Note that the temporary t does not actually appear in a triple, since temporary values are referred to by their position in the triple structure.

A benefit of quadruples over triples can be seen in an optimizing compiler, where instructions are often moved around. With quadruples, if we move an instruction that computes a temporary t, then the instructions that use t require no change. With triples, the result of an operation is referred to by its position, so moving an instruction may require us to change all references to that result.

With indirect triples, an optimizing compiler can move an instruction by reordering the instruction list, without affecting the triples themselves. When implemented in Java, an array of instruction objects is analogous to an indirect triple representation, since Java treats the array elements as references to objects. 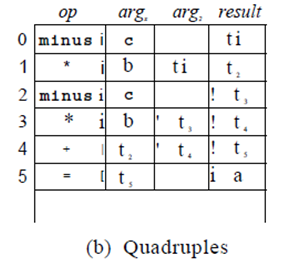 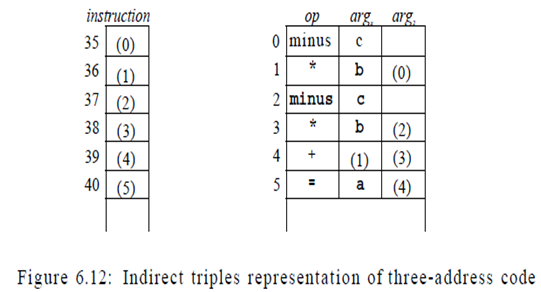