Variable-Length Data on the Stack

Introduction: The run-time memory-management system must deal frequently with the allocation of space for objects the sizes of which are not known at compile time, but which are local to a procedure and thus may be allocated on the stack. In modern languages, objects whose size cannot be determined at compile time are allocated space in the heap.

However, it is also possible to allocate objects, arrays, or other structures of unknown size on the stack, and we discuss here how to do so. The reason to prefer placing objects on the stack if possible is that we avoid the expense of garbage collecting their space. Note that the stack can be used only for an object if it is local to a procedure and becomes inaccessible when the procedure returns.

In Fig. 7.8, procedure p has three local arrays, whose sizes we suppose cannot be determined at compile time. The storage for these arrays is not part of the activation record for p, although it does appear on the stack. Only a pointer to the beginning of each array appears in the activation record itself. Thus, when p is executing, these pointers are at known offsets from the top-of-stack pointer, so the target code can access array elements through these pointers. 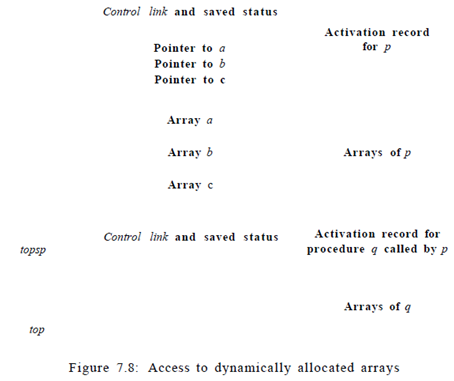