Introduction: If non-reducible flow graphs are expected to be common for the programs to be processed by a compiler or other program-processing software, then we recommend using an iterative rather than a hierarchy-based approach to data-flow analysis. However, if we need only to be prepared for the occasional non-reducible flow graph, then the following "node-splitting” technique is adequate.

Construct regions from natural loops to the extent possible. If the flow graph is non-reducible, we shall find that the resulting graph of regions has cycles, but no back edges, so we cannot parse the graph any further. A typical situation is suggested in Fig. 9.53(a), which has the same structure as the non-reducible flow graph of Fig. 9.45, but the nodes in Fig. 9.53 may actually be complex regions, as suggested by the smaller nodes within. 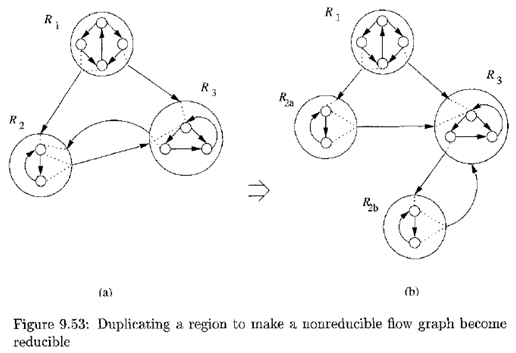 We pick some region R that has more than one predecessor and is not the header of the entire flow graph. If i? has k predecessors, make k copies of the entire flow graph R, and connect each predecessor of i?'s header to a different copy of R. Remember that only the header of a region could possibly have a predecessor outside that region. It turns out, although we shall not prove it, that such node splitting results in a reduction by at least one in the number of regions, after new back edges are identified and their regions constructed. The resulting graph may still not be reducible, but by alternating a splitting phase with a phase where new natural loops are identified and collapsed to regions, we eventually are left with a single region; i.e., the flow graph has been reduced.

Example: The splitting shown in Fig. 9.53(b) has turned the edge R2b -> R3 into a back edge, since f?3 now dominates R2b- These two regions may thus be combined into one. The resulting three regions — Ri, R2a and the new region — form an acyclic graph, and therefore may be combined into a single body region. We thus have reduced the entire flow graph to a single region. In general, additional splits may be necessary, and in the worst case, the total number of basic blocks could become exponential in the number of blocks in the original flow graph.

We must also think about how the result of the data-flow analysis on the split flow graph relates to the answer we desire for the original flow graph. There are two approaches we might consider.