Introduction: There are a number of ways in which a compiler can improve a program without changing the function it computes. Common-subexpression elimination, copy propagation, dead-code elimination, and constant folding are common examples of such function-preserving (or semantics-preserving) transformations; we shall consider each in turn. 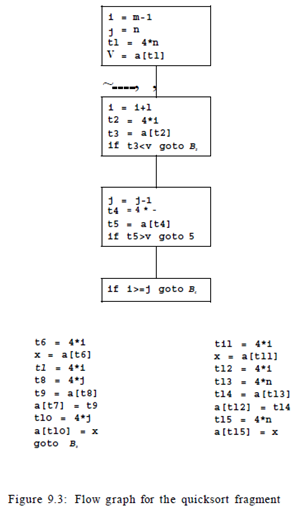 Frequently, a program will include several calculations of the same value, such as an offset in an array. As mentioned in Section 9.1.2, some of these duplicate calculations cannot be avoided by the programmer because they lie below the level of detail accessible within the source language. For example, block £5 shown in Fig. 9.4(a) recalculates 4 * i and 4* j , although none of these calculations were requested explicitly by the programmer. 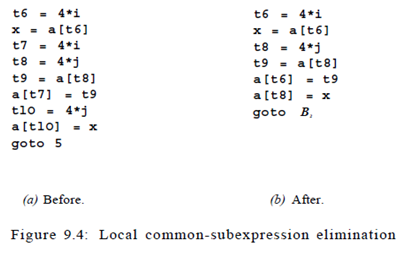 E was assigned has not changed in the interim.2 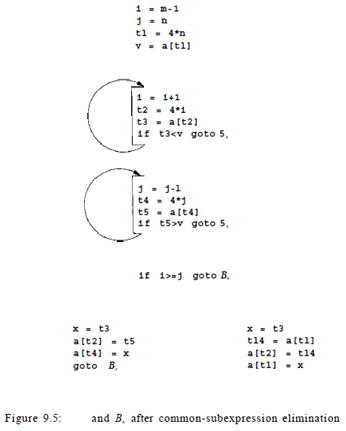 in B<$ can be replaced by

Another common subexpression comes to light in B5 after £4 replaces t8. The new expression a [£4] corresponds to the value of a[j] at the source level. Not only does j retain its value as control leaves B3 and then enters f?5, but a[j], a value computed into a temporary £5, does too, because there are no assignments to elements of the array a in the interim. The statements

in j?5 therefore can be replaced by

The expression a[tl] in blocks B\ and BQ of Fig. 9.5 is not considered a common subexpression, although tl can be used in both places. After control leaves B\ and before it reaches BQ, it can go through B5, where there are assignments to a. Hence, a[tl] may not have the same value on reaching BQ as it did on leaving B\, and it is not safe to treat a[tl] as a common subexpression.