The Principal Sources of Optimization

Introduction: A compiler optimization must preserve the semantics of the original program. Except in very special circumstances, once a programmer chooses and implements a particular algorithm, the compiler cannot understand enough about the program to replace it with a substantially different and more efficient algorithm. A compiler knows only how to apply relatively low-level semantic transformations, using general facts such as algebraic identities like i 0 = i or program semantics such as the fact that performing the same operation on the same values yields the same result.

Causes of Redundancy: There are many redundant operations in a typical program. Sometimes the redundancy is available at the source level. For instance, a programmer may find it more direct and convenient to recalculate some result, leaving it to the compiler to recognize that only one such calculation is necessary. But more often, the redundancy is a side effect of having written the program in a high-level language. In most languages (other than C or C , where pointer arithmetic is allowed), programmers have no choice but to refer to elements of an array or fields in a structure through accesses like A[i][j] or X - fl.

As a program is compiled, each of these high-level data-structure accesses expands into a number of low-level arithmetic operations, such as the computation of the location of the (i, j) t h element of a matrix A. Accesses to the same data structure often share many common low-level operations. Programmers are not aware of these low-level operations and cannot eliminate the redundancies themselves. It is, in fact, preferable from a software-engineering perspective that programmers only access data elements by their high-level names; the programs are easier to write and, more importantly, easier to understand and evolve. By having a compiler eliminate the redundancies, we get the best of both worlds: the programs are both efficient and easy to maintain.

In the following, we shall use a fragment of a sorting program called quicksort to illustrate several important code-improving transformations. The C program in Fig. 9.1 is derived from Sedgewick,1 who discussed the hand-optimization of such a program. We shall not discuss all the subtle algorithmic aspects of this program here, for example, the fact that a[0) must contain the smallest of the sorted elements, and a[max] the largest. 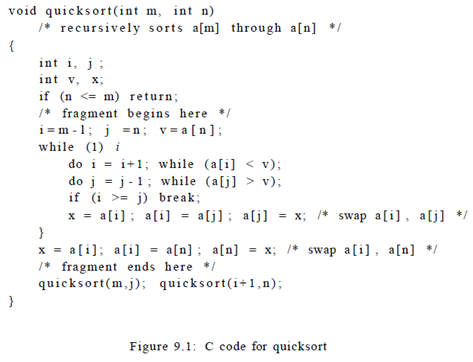 Before we can optimize away the redundancies in address calculations, the address operations in a program first must be broken down into low-level arithmetic operations to expose the redundancies. In the rest of this chapter, we assume that the intermediate representation consists of three-address statements, where temporary variables are used to hold all the results of intermediate expressions. Intermediate code for the marked fragment of the program in Fig. 9.1 is shown in Fig. 9.2.

In this example we assume that integers occupy four bytes. The assignment x = a [ i ] is translated as in Section 6.4.4 into the two three-address statements

in steps (20) and (21). Notice that every array access in the original program translates into a pair of steps, consisting of a multiplication and an array subscripting operation. As a result, this short program fragment translates into a rather long sequence of three-address operations. 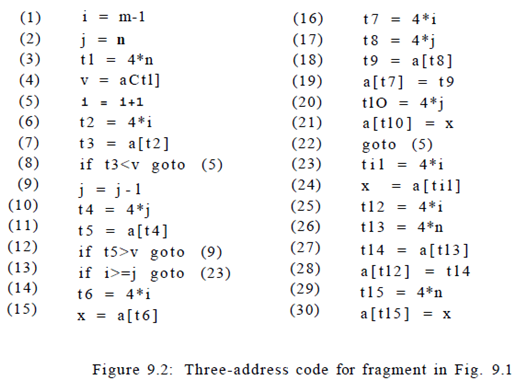