We know that the initiation interval must be greater than the bound computed from a loop's resource requirement and dependence cycles as discussed above. If we can find a schedule meeting this bound, we have found the optimal schedule. If we fail to find such a schedule, we can try again with larger initiation intervals until a schedule is found. Note that if heuristics, rather than exhaustive search, are used, this process may not find the optimal schedule.

Whether we can find a schedule near the lower bound depends on properties of the data-dependence graph and the architecture of the target machine. We can easily find the optimal schedule if the dependence graph is acyclic and if every machine instruction needs only one unit of one resource. It is also easy to find a schedule close to the lower bound if there are more hardware resources than can be used by graphs with dependence cycles. For such cases, it is advisable to start with the lower bound as the initial initiation-interval target, then keep increasing the target by just one clock with each scheduling attempt. Another possibility is to find the initiation interval using a binary search. We can use as an upper bound on the initiation interval the length of the schedule for one iteration produced by list scheduling.

Scheduling Acyclic Data-Dependence Graphs: For simplicity, we assume for now that the loop to be software pipelined containsonly one basic block. This assumption will be relaxed in Section 10.5.11. 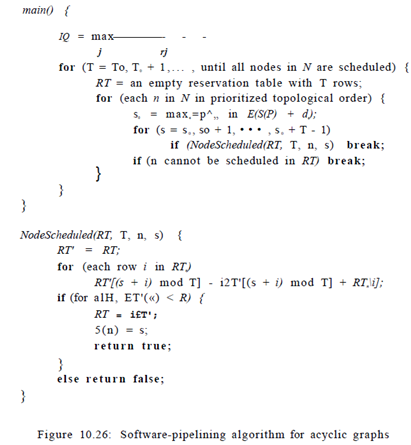 INPUT: A machine-resource vector R = [ n , r 2 , . . . ] , where ^ is the number of units available of the ith kind of resource, and a data-dependence graph G = (N,E). Each operation n in N is labeled with its resource-reservation table RTn; each edge e = m n2 in E is labeled with {Se,de) indicating that n2 must execute no earlier than de clocks after node ni from the Seth preceding iteration.

OUTPUT: A software-pipelined schedule S and an initiation interval T.

The algorithm uses a list-scheduling approach in each attempt. It uses a modular resource-reservation RT to keep track of the resource commitment in the steady state. Operations are scheduled in topological order so that the data dependences can always be satisfied by delaying operations. To schedule an operation, it first finds a lower bound so according to the data-dependence constraints. It then invokes Node Scheduled to check for possible resource conflicts in the steady state. If there is a resource conflict, the algorithm tries to schedule the operation in the next clock. If the operation is found to conflict for T consecutive clocks, because of the modular nature of resource-conflict detection, further attempts are guaranteed to be futile. At that point, the algorithm considers the attempt a failure, and another initiation interval is tried.

The heuristics of scheduling operations as soon as possible tends to minimize the length of the schedule for iteration. Scheduling an instruction as early as possible, however, can lengthen the lifetimes of some variables. For example, loads of data tend to be scheduled early, sometimes long before they are used. One simple heuristic is to schedule the dependence graph backwards because there are usually more loads than stores.