Introduction: To find context-sensitive points-to relations, we can simply apply the same context-insensitive points-to analysis to the cloned call graph. Since a method in the cloned call graph is represented by the original method and its context, we revise all the Datalog rules accordingly. For simplicity, the rules below do not include the type restriction, and the _'s are any new variables. 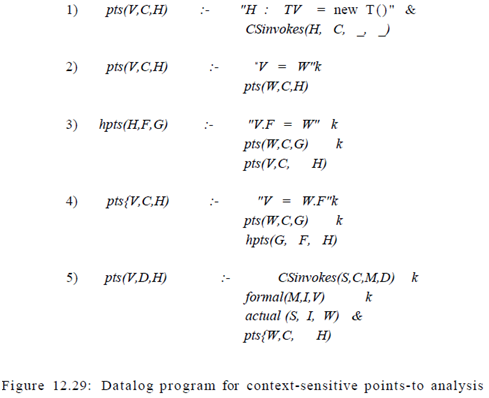 Additional Observations About Sensitivity: What we have described is one formulation of context sensitivity that has beenshown to be practical enough to handle many large real-life Java programs, using the tricks described briefly in the next section. Nonetheless, this algorithm cannot yet handle the largest of Java applications.

The heap objects in this formulation are named by their call site, but without context sensitivity. That simplification can cause problems. Consider the object-factory idiom where, all objects of the same type are allocated by the same routine. The current scheme would make all objects of that class share the same name. It is relatively simple to handle such cases by essentially inlining the allocation code. In general, it is desirable to increase the context sensitivity in the naming of objects. While it is easy to add context sensitivity of objects to the Datalog formulation, getting the analysis to scale to large programs is another matter.