Introduction: We are now ready to start talking about code-scheduling algorithms. We start with the easiest problem: scheduling operations in a basic block consisting of machine instructions. Solving this problem optimally is NP-complete. But in practice, a typical basic block has only a small number of highly constrained operations, so simple scheduling techniques suffice. We shall introduce a simple but highly effective algorithm, called list scheduling, for this problem.

2. Each edge e in E is labeled with delay de indicating that the destination node must be issued no earlier than de clocks after the source node is issued. Suppose operation n± is followed by operation n2, and the same location is accessed by both, with latencies l\ and l2 respectively. That is, the location's value is produced l\ clocks after the first instruction begins, and the value is needed by the second instruction l2 clocks after that instruction begins (note — \ and l2 = 0 is typical). Then, there is an edge n\ -» n2 in E labeled with delay l\ — l2.

Example 10.6: Consider a simple machine that can execute two operations every clock. The first must be either a branch operation or an ALU operation of the form:

The second must be a load or store operation of the form: 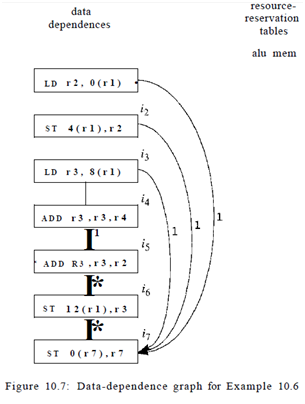 The load operation (LD) is fully pipelined and takes two clocks. However, a load can be followed immediately by a store ST that writes to the memory location read. All other operations complete in one clock.

Shown in Fig. 10.7 is the dependence graph of an example of a basic block and its resources requirement. We might imagine that Rl is a stack pointer, used to access data on the stack with offsets such as 0 or 12. The first instruction loads register R2, and the value loaded is not available until two clocks later. This observation explains the label 2 on the edges from the first instruction to the second and fifth instructions, each of which needs the value of R2. Similarly, there is a delay of 2 on the edge from the third instruction to the fourth; the value loaded into R3 is needed by the fourth instruction and not available until two clocks after the third begins.

Since we do not know how the values of Rl and R7 relate, we have to consider the possibility that an address like 8 (Rl) is the same as the address 0 (R7). That is, the last instruction may be storing into the same address that the third instruction loads from. The machine model we are using allows us to store into a location one clock after we load from that location, even though the value to be loaded will not appear in a register until one clock later. This observation explains the label 1 on the edge from the third instruction to the last. The same reasoning explains the edges and labels from the first instruction to the last. The other edges with label 1 are explained by a dependence or possible dependence conditioned on the value of R7.