Basic Concepts of Parallelism and Locality

Introduction: This section introduces the basic concepts related to parallelization and locality optimization. If operations can be executed in parallel, they also can be reordered for other goals such as locality. Conversely, if data dependences in a program dictate that instructions in a program must execute serially, there is obviously no parallelism, nor is there any opportunity to reorder instructions to improve locality. Thus parallelization analysis also finds the available opportunities for code motion to improve data locality.

To minimize communication in parallel code, we group together all related operations and assign them to the same processor. The resulting code must therefore have data locality. One crude approach to getting good data locality on a uniprocessor is to have the processor execute the code assigned to each processor in succession.

In this introduction, we start by presenting an overview of parallel computer architectures. We then show the basic concepts in parallelization, the kind of transformations that can make a big difference, as well as the concepts useful for parallelization. We then discuss how similar considerations can be used to optimize locality. Finally, we introduce informally the mathematical concepts used in this chapter. 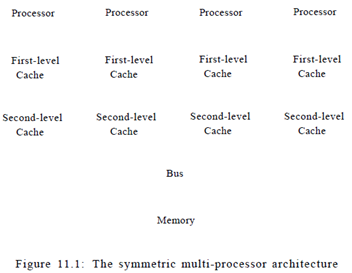 Symmetric multiprocessors use a coherent cache protocol to hide the presence of caches from the programmer. Under such a protocol, several processors are allowed to keep copies of the same cache line1 at the same time, provided that they are only reading the data. When a processor wishes to write to a cache line, copies from all other caches are removed. When a processor requests data not found in its cache, the request goes out on the shared bus, and the data will be fetched either from memory or from the cache of another processor.

The time taken for one processor to communicate with another is about twice the cost of a memory access. The data, in units of cache lines, must first be written from the first processor's cache to memory, and then fetched from the memory to the cache of the second processor. You may think that inter processor communication is relatively cheap, since it is only about twice as slow as a memory access. However, you must remember that memory accesses are very expensive when compared to cache hits—they can be a hundred times slower. This analysis brings home the similarity between efficient parallelization and locality analysis. For a processor to perform well, either on its own or in the context of a multiprocessor, it must find most of the data it operates on in its cache.

In the early 2000's, the design of symmetric multiprocessors no longer scaled beyond tens of processors, because the shared bus, or any other kind of interconnect for that matter, could not operate at speed with the increasing number of processors. To make processor designs scalable, architects introduced yet another level in the memory hierarchy. Instead of having memory that is equally far away for each processor, they distributed the memories so that each processor could access its local memory quickly as shown in Fig. 11.2. Remote memories thus constituted the next level of the memory hierarchy; they are collectively bigger but also take longer to access. Analogous to the principle in memory-hierarchy design that fast stores are necessarily small, machines that support fast inter-processor communication necessarily have a small number of processors.

There are two variants of a parallel machine with distributed memories: NUM A (non-uniform memory access) machines and message-passing machines. NUM A architectures provide a shared address space to the software, allowing processors to communicate by reading and writing shared memory. On message passing machines, however, processors have disjoint address spaces, and processors communicate by sending messages to each other. Note that even though it is simpler to write code for shared memory machines, the software must have good locality for either type of machine to perform well.