Data-dependence analysis is highly sensitive to the programming language used in the program. For type-unsafe languages like C and C , where a pointer can be cast to point to any kind of object, sophisticated analysis is necessary to prove independence between any pair of pointer-based memory accesses. Even local or global scalar variables can be accessed indirectly unless we can prove that their addresses have not been stored anywhere by any instruction in the program. In type-safe languages like Java, objects of different types are necessarily distinct from each other. Similarly, local primitive variables on the stack cannot be aliased with accesses through other names.

A correct discovery of data dependences requires a number of different forms of analysis. We shall focus on the major questions that must be resolved if the compiler is to detect all the dependences that exist in a program, and how to use this information in code scheduling. Later chapters show how these analyses are performed.

The unbounded number of pseudo registers used in the intermediate representation must eventually be mapped to the small number of physical registers available on the target machine. Mapping several pseudo registers to the same physical register has the unfortunate side effect of creating artificial storage dependences that constrain instruction-level parallelism. Conversely, executing instructions in parallel creates the need for more storage to hold the values being computed simultaneously. Thus, the goal of minimizing the number of registers used conflicts directly with the goal of maximizing instruction-level parallelism. Examples 10.2 and 10.3 below illustrate this classic trade-off between storage and parallelism.

If all the memory locations accessed are known to be distinct from each other, then the copies can proceed in parallel. However, if tl and t2 are assigned the same register so as to minimize the number of registers used, the copies are necessarily serialized.

Example: Traditional register-allocation techniques aim to minimize the number of registers used when performing a computation. Consider the expression

shown as a syntax tree in Fig. 10.2. It is possible to perform this computation using three registers, as illustrated by the machine code in Fig. 10.3. 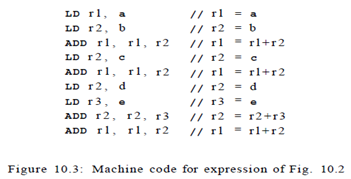 Had we used different registers for every partial sum, the expression could be evaluated in 4 steps, which is the height of the expression tree in Fig. 10.2. The parallel computation is suggested by Fig. 10.4.