Introduction: An interprocedural analysis operates across an entire program, flowing information from the caller to its callees and vice versa. One relatively simple but useful technique is to inline procedures, that is, to replace a procedure invocation by the body of the procedure itself with suitable modifications to account for parameter passing and the return value. This method is applicable only if we know the target of the procedure call.

If procedures are invoked indirectly through a pointer or via the method dispatch mechanism prevalent in object-oriented programming, analysis of the program's pointers or references can in some cases determine the targets of the indirect invocations. If there is a unique target, inlining can be applied. Even if a unique target is determined for each procedure invocation, inlining must be applied judiciously. In general, it is not possible to inline recursive procedures directly, and even without recursion, inlining can expand the code size exponentially.

Basic Concepts: In this section, we introduce call graphs — graphs that tell us which procedurescan call which. We also introduce the idea of "context sensitivity," where dataflowanalyses are required to take cognizance of what the sequence of procedurecalls has been. That is, context-sensitive analysis includes (a synopsis of) thecurrent sequence of activation records on the stack, along with the current pointin the program, when distinguishing among different "places" in the program.

Call Graphs: A call graph for a program is a set of nodes and edges such that

2.       There is one node for each call site, that is, a place in the program where a procedure is invoked.

Many programs written in languages like C and Fortran make procedure calls directly, so the call target of each invocation can be determined statically. In that case, each call site has an edge to exactly one procedure in the call graph. However, if the program includes the use of a procedure parameter or function pointer, the target generally is not known until the program is run and, in fact, may vary from one invocation to another. Then, a call site can link to many or all procedures in the call graph. 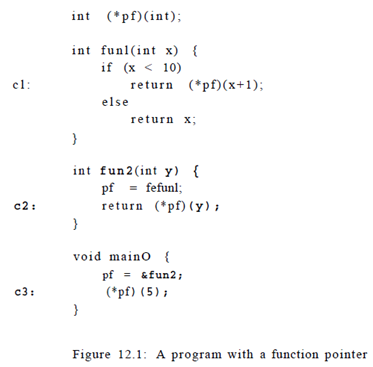 Indirect calls are the norm for object-oriented programming languages. In particular, when there is overriding of methods in subclasses, a use of method m may refer to any of a number of different methods, depending on the subclass of the receiver object to which it was applied. The use of such virtual method invocations means that we need to know the type of the receiver before we can determine which method is invoked.

Example: Figure 12.1 shows a C program that declares pf to be a global pointer to a function whose type is "integer to integer." There are two functions of this type, fun1 and fun2, and a main function that is not of the type that pf points to. The figure shows three call sites, denoted c1, c2, and c3; the labels are not part of the program.

In general, the presence of references or pointers to functions or methods requires us to get a static approximation of the potential values of all procedure parameters, function pointers, and receiver object types. To make an accurate approximation, interprocedural analysis is necessary. The analysis is iterative, starting with the statically observable targets. As more targets are discovered, the analysis incorporates the new edges into the call graph and repeats discovering more targets until convergence are reached.