Introduction: Writing correct and efficient sequential programs is difficult; writing parallel programs that are correct and efficient is even harder. The level of difficulty increases as the granularity of parallelism exploited decreases. As we see above, programmers must pay attention to data locality to get high performance. Furthermore, the task of taking an existing sequential program and parallelizing it is extremely hard. It is hard to catch all the dependences in the program, especially if it is not a program with which we are familiar. Debugging a parallel program is harder yet, because errors can be nondeterministic. Ideally, a parallelizing compiler automatically translates ordinary sequential programs into efficient parallel programs and optimizes the locality of these programs.

Unfortunately, compilers without high-level knowledge about the application can only preserve the semantics of the original algorithm, which may not be amenable to parallelization. Furthermore, programmers may have made arbitrary choices that limit the program's parallelism. Successes in parallelization and locality optimizations have been demonstrated for Fortran numeric applications that operate on arrays with affine accesses. Without pointers and pointer arithmetic, Fortran is easier to analyze. Note that not all applications have affine accesses; most notably, many numeric applications operate on sparse matrices whose elements are accessed indirectly through another array. This chapter focuses on the parallelization and optimizations of kernels, consisting of mostly tens of lines.

As illustrated by Examples 11.2 and 11.3, parallelization and locality optimization require that we reason about the different instances of a loop and their relations with each other. This situation is very different from data-flow analysis, where we combine information associated with all instances together. For the problem of optimizing loops with array accesses, we use three kinds of spaces. Each space can be thought of as points on a grid of one or more dimensions. 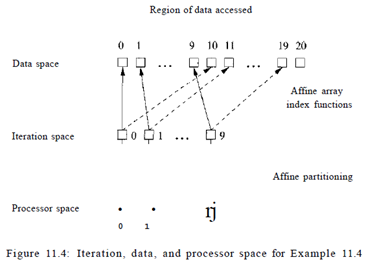 The following example will illustrate the three spaces — iteration, data, and processor. It will also introduce informally the important concepts and issues that need to be addressed in using these spaces to parallelize code. The concepts each will be covered in detail in later sections.

Example: Figure 11.4 illustrates the different spaces and their relations used in the following program:

The three spaces and the mappings among them are as follows: