Introduction to Software Pipelining of Loops

Introduction: Software pipelining provides a convenient way of getting optimal resource usage and compact code at the same time. Let us illustrate the idea with our running example.

Example: In Fig. 10.19 is the code from Example 10.12 unrolled five times. (Again we leave out the consideration of register usage.) Shown in row I are all the operations issued at clock i; shown in column j are all the operations from iteration j. Note that every iteration has the same schedule relative to its beginning, and also note that every iteration is initiated two clocks after the preceding one. It is easy to see that this schedule satisfies all the resource and data-dependence constraints. 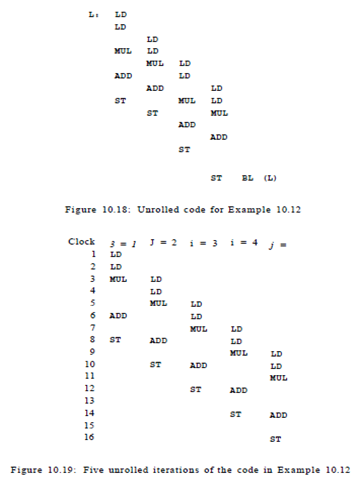 Such dynamic behavior can be encoded succinctly with the code shown in Fig. 10.20, if we assume that the loop has at least 4 iterations. Each row in the figure corresponds to one machine instruction. Lines 7 and 8 form a 2-clock loop, which is executed n - 3 times, where n is the number of iterations in the original loop. 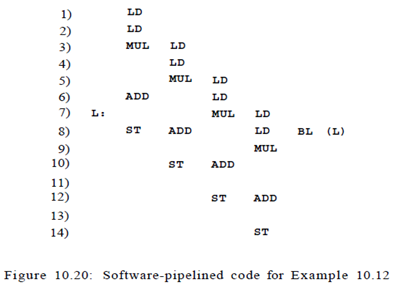 For this example, we know that the loop cannot be run at a rate faster than 2 clocks per iteration, since the machine can only issue one read every clock, and there are two reads in each iteration. The software-pipelined loop above executes in 2n 6 clocks, where n is the number of iterations in the original loop. As n oo, the throughput of the loop approaches the rate of one iteration every two clocks. Thus, software scheduling, unlike unrolling, can potentially encode the optimal schedule with a very compact code sequence.

Note that the schedule adopted for each individual iteration is not the shortest possible. Comparison with the locally optimized schedule showed in Fig. 10.17 shows that a delay is introduced before the ADD operation. The delay is placed strategically so that the schedule can be initiated every two clocks without resource conflicts. Had we stuck with the locally compacted schedule, the initiation interval would have to be lengthened to 4 clocks to avoid resource conflicts, and the throughput rate would be halved. This example illustrates an important principle in pipeline scheduling: the schedule must be chosen carefully in order to optimize the throughput. A locally compacted schedule, while minimizing the time to complete iteration, may result in suboptimal throughput when pipelined.