Introduction: The simplest approach to scheduling basic blocks involves visiting each node of the data-dependence graph in "prioritized topological order." Since there can be no cycles in a data-dependence graph, there is always at least one topological order for the nodes. However, among the possible topological orders, some may be preferable to others. We discuss in Section 10.3.3 some of the strategies for picking a topological order, but for the moment, we just assume that there is some algorithm for picking a preferred order. The list-scheduling algorithm we shall describe next visits the nodes in the chosen prioritized topological order. The nodes may or may not wind up being scheduled in the same order as they are visited. But the instructions are placed in the schedule as early as possible, so there is a tendency for instructions to be scheduled in approximately the order visited.

INPUT: A machine-resource vector R — [ r i , r 2 , . . . ] , where r« is the number of units available of the ith kind of resource, and a data-dependence graph G — (N, E). Each operation n in N is labeled with its resource-reservation table RTn; each edge e = ni —> n2 in E is labeled with de indicating that n2 must execute no earlier than de clocks after m.

OUTPUT: A schedule S that maps the operations in N into time slots in which the operations can be initiated satisfying all the data and resources constraints.

METHOD: Execute the program in Fig. 10.8. A discussion of what the "prioritized topological order" 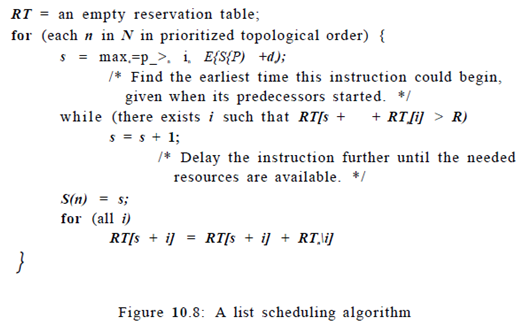 List scheduling does not backtrack; it schedules each node once and only once. It uses a heuristic priority function to choose among the nodes that are ready to be scheduled next. Here are some observations about possible prioritized orderings of the nodes:

Using the height as the priority function, Algorithm 10.7 finds an optimal schedule as shown in Fig. 10.9. Notice that we schedule the load of R3 first, since it has the greatest height. The add of R3 and R4 has the resources to be