Introduction: The performance of a processor, be it a part of a multiprocessor or not, is highly sensitive to its cache behavior. Misses in the cache can take tens of clock cycles, so high cache-miss rates can lead to poor processor performance. In the context of a multiprocessor with a common memory bus, contention on the bus can further add to the penalty of poor data locality.

As we shall see, even if we just wish to improve the locality of uniprocessors, the affine-partitioning algorithm for parallelization is useful as a means of identifying opportunities for loop transformations. In this section, we describe three techniques for improving data locality in uniprocessors and multiprocessors.

1. We improve the temporal locality of computed results by trying to use the results as soon as they are generated. We do so by dividing a computation into independent partitions and executing all the dependent operations in each partition close together.

Thus, even if our goal is to optimize for sequential execution, it is profitable to use parallelization to find these related operations and place them together. The algorithm we use here is similar to that of Algorithm (Parallelism with Minimum Synchronization), which finds all the granularities of parallelism starting with the outermost loop. The algorithm parallelizes strongly connected components individually, if we cannot find synchronization-free parallelism at each level. This parallelization tends to increase communication. Thus, we combine separately parallelized strongly connected components greedily, if they share reuse. 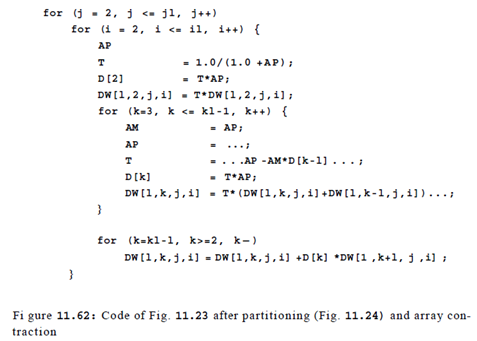 Array Contraction: The optimization of array contraction provides another illustration of the tradeoff between storage and parallelism, which was first introduced in the context of instruction-level parallelism in Section 10.2.3. Just as using more registers allows for more instruction-level parallelism, using more memory allows for more loop-level parallelism. As shown in the multigrid example in Section 11.7.1, expanding a temporary scalar variable into an array allows different iterations to keep different instances of the temporary variables and to execute at the same time. Conversely, when we have a sequential execution that operates on one array element at a time serially, we can contract the array, replace it with a scalar, and have each iteration use the same location.

In the transformed multigrid program shown in Fig. 11.24, each iteration of the inner loop produces and consumes a different element of AP, AM, T, and a row of D. If these arrays are not used outside of the code excerpt, the iterations can serially reuse the same data storage instead of putting the values in different elements and rows, respectively. Figure 11.62 shows the result of reducing the dimensionality of the arrays. This code runs faster than the original, because it reads and writes less data. Especially in the case when an array is reduced to a scalar variable, we can allocate the variable to a register and eliminate the need to access memory altogether.

As less storage is used, less parallelism is available. Iterations in the transformed code in Fig. 11.62 now share data dependences and no longer can be executed in parallel. To parallelize the code on P processors, we can expand each of the scalar variables by a factor of P and have each processor access its own private copy. Thus, the amount by which the storage is expanded is directly correlated to the amount of parallelism exploited.

There are three reasons it is common to find opportunities for array contraction:

1. Higher-level programming languages for scientific applications, such as Matlab and Fortran 90, support array-level operations. Each subexpression of array operations produces a temporary array. Because the arrays can be large, every array operation such as a multiply or add would require reading and writing many memory locations, while requiring relatively few arithmetic operations. It is important that we reorder operations so that data is consumed as it is produced and that we contract these arrays into scalar variables.

2.Supercomputers built in the 80's and 90's are all vector machines, so many scientific applications developed then have been optimized for such machines. Even though vectorizing compilers exist, many programmers still write their code to operate on vectors at a time. The multigrid code example of this chapter is an example of this style.

3. Opportunities for contraction are also introduced by the compiler. As illustrated by variable T in the multigrid example, a compiler would expand arrays to improve parallelization. We have to contract them when the space expansion is not necessary.