Introduction: We use two high-level metrics to estimate how well a parallel application will perform: parallelism coverage which is the percentage of the computation that runs in parallel, granularity of parallelism, which is the amount of computation that each processor can execute without synchronizing or communicating with others. One particularly attractive target of parallelization is loops: a loop may have much iteration, and if they are independent of each other, we have found a great source of parallelism. 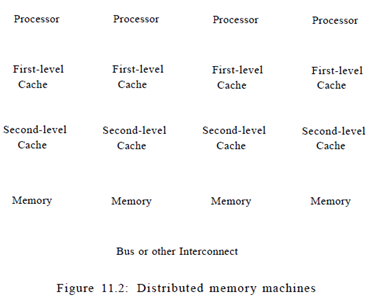 Amdahl's Law: The significance of parallelism coverage is succinctly captured by Amdahl's Law. Amdahl's Law states that, if / is the fraction of the code parallelized, and if the parallelized version runs on a p-processor machine with no communication or parallelization overhead, the speedup is

Granularity of Parallelism: It is ideal if the entire computation of an application can be partitioned into many independent coarse-grain tasks because we can simply assign the different tasks to different processors. One such example is the SETI (Search for Extra-Terrestrial Intelligence) project, which is an experiment that uses home computers connected over the Internet to analyze different portions of radio telescope data in parallel. Each unit of work, requiring only a small amount  of input and generating a small amount of output, can be performed independently of all others. As a result, such a computation runs well on machines over the Internet, which has relatively high communication latency (delay) and low bandwidth.

Most applications require more communication and interaction between processors, yet still allow coarse-grained parallelism. Consider, for example, the web server responsible for serving a large number of mostly independent requests out of a common database. We can run the application on a multiprocessor, with a thread implementing the database and a number of other threads servicing user requests. Other examples include drug design or airfoil simulation, where the results of many different parameters can be evaluated independently. Sometimes the evaluation of even just one set of parameters in a simulation takes so long that it is desirable to speed it up with parallelization. As the granularity of available parallelism in an application decreases, better inter processor communication support and more programming effort are needed.

Many long-running scientific and engineering applications, with their simple control structures and large data sets, can be more readily parallelized at a finer grain than the applications mentioned above. Thus, this chapter is devoted primarily to techniques that apply to numerical applications, and in particular, to programs that spend most of their time manipulating data in multidimensional arrays.