Introduction: Different partitions in a loop often read the same data, or read and write the same cache lines. In this and the next two sections, we discuss how to optimize for locality when reuse is found across partitions.

Reuse in Innermost Blocks: We adopt the simple model that data can be found in the cache if it is reused within a small number of iterations. If the innermost loop has a large or unknown bound, only reuse across iterations of the innermost loop translates into a locality benefit. Blocking creates inner loops with small known bounds, allowing reuse within and across entire blocks of computation to be exploited. Thus, blocking has the effect of capitalizing on more dimensions of reuse.

Example: Consider the matrix-multiply code shown in Fig. 11.5 and its blocked version in Fig. 11.7. Matrix multiplication has reuse along every dimension of its three-dimensional iteration space. In the original code, the innermost loop has n iterations, where n is unknown and can be large. Our simple model assumes that only the data reused across iterations in the innermost loop is found in the cache.

In the blocked version, the three innermost loops execute a three-dimensional block of computation, with B iterations on each side. The block size B is chosen by the compiler to be small enough so that all the cache lines read and written within the block of computation fit into the cache. Thus reused data across iterations in the third outermost loop can be found in the cache.

We can optimize locality of the innermost fully permutable loop nest by blocking the subset of loops that share reuse. We can generalize the notion of blocking to exploit reuses found among iterations of outer parallel loops, also. Observe that blocking primarily interleaves the execution of a small number of instances of the innermost loop. In matrix multiplication, each instance of the innermost loop computes one element of the array answer; there are n2 of them. Blocking interleaves the execution of a block of instances, computing B iterations from each instance at a time. Similarly, we can interleave iterations in parallel loops to take advantage of reuses between them.

We define two primitives below that can reduce the distance between reuses across different iterations. We apply these primitives repeatedly, starting from the outermost loop until all the reuses are moved adjacent to each other in the innermost block. 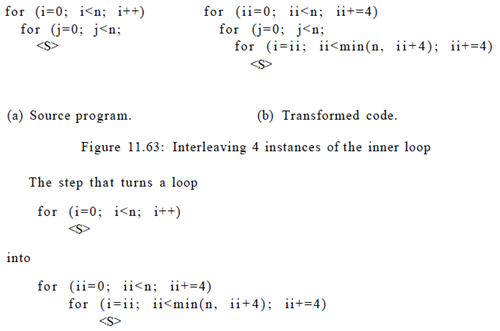 Interleaving Inner Loops in a Parallel Loop: Consider the case where an outer parallelizable loop contains an inner loop. To exploit reuse across iterations of the outer loop, we interleave the executions of a fixed number of instances of the inner loop, as shown in Fig. 11.63. Creating two-dimensional inner blocks, this transformation reduces the distance between reuse of consecutive iterations of the outer loop is known as stripmining. Interleaving Statements in a Parallel Loop: Consider the case where a parallelizable loop contains a sequence of statements si, S2, . . . , sm. If some of these statements are loops themselves, statements from consecutive iterations may still be separated by many operations. We can exploit reuse between iterations by again interleaving their executions, as shown in Figure. This transformation distributes a stripmined loop across the statements. Again, if the outer loop has a small fixed number of iterations, we need not stripmine the loop but simply distribute the original loop over all the statements.We use Si(j) to denote the execution of statement si in iteration j. Instead of the original sequential execution order shown in Fig. 11. (a), the code executes in the order shown in Fig.(b).