Introduction: To require no communication, each pair of operations that share data dependence must be assigned to the same processor. We refer to these constraints as "space-partition constraints." Any mapping that satisfies these constraints creates partitions that are independent of one another. Note that such constraints can be satisfied by putting all the operations in a single partition. Unfortunately, that "solution" does not yield any parallelism. Our goal is to create as many independent partitions as possible while satisfying the space-partition constraints; that is, operations are not placed on the same processor unless it is necessary.

For all ii in Zdl and i2 in Zd2 such that 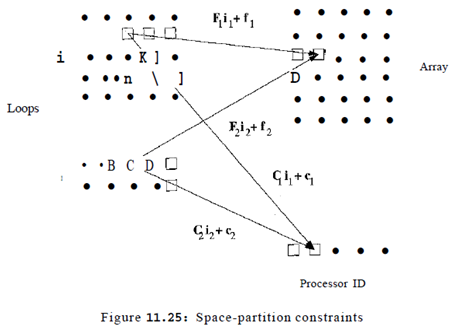 The goal of the parallelization algorithm is to find, for each statement, the partition with the highest rank that satisfies these constraints. Shown in Fig. 11.25 is a diagram illustrating the essence of the space partition constraints. Suppose there are two static accesses in two loop nests with index vectors ii and i2 . These accesses are dependent in the sense that they access at least one array element in common, and at least one of them is a write. The figure shows particular dynamic accesses in the two loops that happen to access the same array element, according to the affine access functions F i i i f i and F 2 i 2 f2 . Synchronization is necessary unless the affine partitions for the two static accesses, C i i i c i and C 2 i 2 c 2 , assign the dynamic accesses to the same processor.

We show a small program designed to illustrate the power of the technique. Real applications are usually much simpler than this, but may have boundary conditions resembling some of the issues shown here. We shall use this example throughout this chapter to illustrate those programs with affine accesses have relatively simple space-partition constraints, that these constraints can be solved using standard linear algebra techniques, and that the desired SPMD program can be generated mechanically from the affine partitions.