The Parallelization Algorithm and Hierarchical Time

Introduction: While the relation - < S l S 2 can be very hard to compute in general, there is a family of programs to which the optimizations of this section are commonly applied, and for which there is a straightforward way to compute dependencies. Assume that the program is block structured, consisting of loops and simple arithmetic operations and no other control constructs. A statement in the program is an assignment statement, a sequence of statements, or a loop construct whose body is a statement. The control structure thus represents a hierarchy. At the top of the hierarchy is the node representing the statement of the whole program. An assignment statement is a leaf node. If a statement is a sequence, then its children are the statements within the sequence, laid out from left to right according to their lexical order. If a statement is a loop, then its children are the components of the loop body, which is typically a sequence of one or more statements. 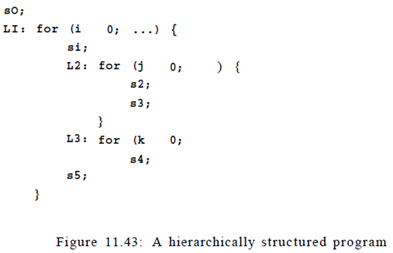 The Parallelization Algorithm: We now present a simple algorithm that first splits up the computation into asmany different loops as possible, then parallelizes them independently.

Algorithm: Maximize the degree of parallelism allowed by 0(1) synchronizations.

INPUT: A program with array accesses.

OUTPUT: SPMD code with a constant number of synchronization barriers.

2.       Transform the code to execute SCC's in a topological order by applying fission if necessary.

3.       Apply Algorithm 11.43 to each SCC to find all of its synchronization-free parallelism. Barriers are inserted before and after each parallelized SCC.