A metropolitan area network, or MAN, covers a city. The best-known example of a MAN is the cable television network available in many cities. This system grew from earlier community antenna systems used in areas with poor over-the-air television reception. In these early systems, a large antenna was placed on top of a nearby hill and signal was then piped to the subscribers' houses.

At first, these were locally-designed, ad hoc systems. Then companies began jumping into the business, getting contracts from city governments to wire up an entire city. The next step was television programming and even entire channels designed for cable only. Often these channels were highly specialized, such as all news, all sports, all cooking, all gardening, and so on. But from their inception until the late 1990s, they were intended for television reception only.

To a first approximation, a MAN might look something like the system shown in Fig.2. In this figure both television signals and Internet are fed into the centralized head end for subsequent distribution to people's homes. Cable television is not the only MAN. Recent developments in high-speed wireless Internet access resulted in another MAN, which has been standardized as IEEE 802.16. 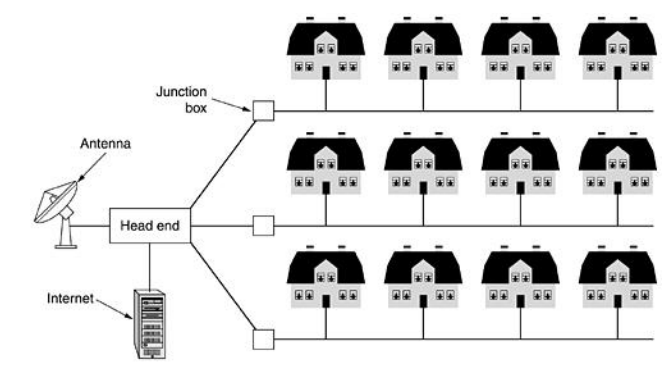 A MAN is implemented by a standard called DQDB (Distributed Queue Dual Bus) or IEEE 802.16. DQDB has two unidirectional buses (or cables) to which all the computers are attached.