Problems of the OSI Model

Problems of the OSI Model and Protocols

1. Bad Timing:
The time at which a standard is established is absolutely critical to its success. David Clark of M.I.T. has a theory of standards that he calls the apocalypse of the two elephants, which is illustrated in Fig.9.

This figure shows the amount of activity surrounding a new subject. When the subject is first discovered, there is a burst of research activity in the form of discussions,papers, and meetings. After a while this activity subsides, corporations discover the subject, and the billion-dollar wave of investment hits. It is essential that the standards be written in the trough in between the two ''elephants.'' If the standards are written too early, before the research is finished, the subject may still be poorly understood; the result is bad standards. If they are written too late, so many companies may have already made major investments in different ways of doing things that the standards are effectively ignored. If the interval between the two elephants is very short(because everyone is in a hurry to get started), the people developing the standards may get crushed. 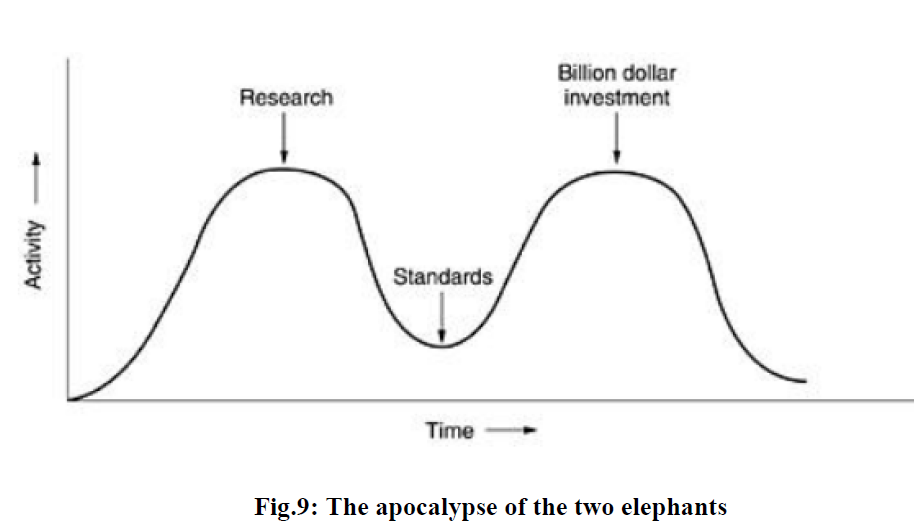 2. Bad Technology:
The second reason that OSI never caught on is that both the model and the protocols are flawed. The choice of seven layers was more political than technical, and two of the layers (session and presentation) are nearly empty, whereas two other ones (data link and network) are overfull.

The OSI model, along with the associated service definitions and protocols, is extraordinarily complex. When piled up, the printed standards occupy a significant fraction of a meter of paper. They are also difficult to implement and inefficient in operation. In addition to being incomprehensible, another problem with OSI is that some functions, such as addressing, flow control, and error control, reappear again and again in each layer.

3. Bad Implementations:
Given the enormous complexity of the model and the protocols, it will come as no surprise that the initial implementations were huge, unwieldy, and slow. Everyone who tried them got burned. It did not take long for people to associate ''OSI'' with ''poor quality.'' Although the products improved in the course of time, the image stuck.

4. Bad Politics:
On account of the initial implementation, many people, especially in academia, thought of TCP/IP as part of UNIX, and UNIX in the 1980s in academia was not unlike parenthood (then incorrectly called motherhood) and apple pie.

OSI, on the other hand, was widely thought to be the creature of the European telecommunication ministries, the European Community, and later the U.S. Government. This belief was only partly true, but the very idea of a bunch of government bureaucrats trying to shove a technically inferior standard down the throats of the poor researchers and programmers down in the trenches actually developing computer networks did not help much. Some people viewed this development in the same light as IBM announcing in the 1960s that PL/I was the language of the future, or DoD correcting this later by announcing that it was actually Ada.